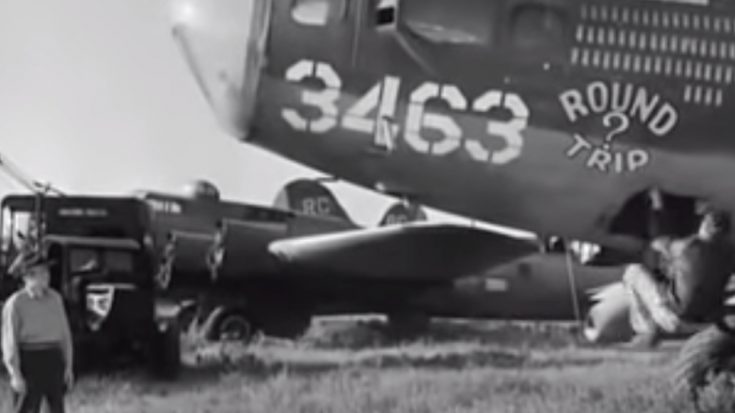 It’s not action-packed. There’s not a lot of flying. Planes aren’t even a main feature. Despite this, the 1946 post-WWII film The Best Years Of Our Lives still strikes as one of the finest out there. Especially that scene where Fred Derry, former bombardier, strolls through a massive B-17 aircraft boneyard.

Here’s some revealing facts behind the remarkable scene:

6. Shot At A California Boneyard

The scene was shot at the Ontario Army Airport in California. Over 2,000 airplanes were dismantled there after the war. Everything was pretty much as is, but the crew did add a little dirt to “Round Trip?” to make her look a little grittier.

Some of the planes seen in the boneyard are identifiable. Among them:

Boneyards were a phenomenon. With the development of jet technology and the end of the war, propellor driven fighters and bombers were suddenly out of a job. Many were sold of given to other nations, but the majority were gathered into boneyards.

In the film, the “junkman” tells Dana Andrews’ character that the parts will be used to build houses for returning parts. This is true, but only for some of the planes.

Although not part of the film, it’s worth mentioning that the largest post-WWII boneyard at the time was in Arizona at the Davis-Monthan Air Force Base. It was full of B-29 Superfortresses and C-47s. Arizona’s arid conditions made it the perfect location for the aircraft to be stored for spare parts or reuse. To this day, rows and rows of planes still await their fate.

In addition to other countries getting some of the old warbirds as they were, metal from the air-frames was used to rebuild Europe through the Marshall Plan. Aluminum was a high commodity post-war that could be shaped into ingots and sold all around the world.

1. The Scene Was Invented On The Spot

The director, William Wyler, used his real life experience to create the boneyard scene. The script said one thing – “He walks around thinking of how the war had done him in.” But having ridden in a bombardier’s compartment, he got the idea that Dana Andrew would climb up inside and get lost in his memory.

“It was all invented on the spot because the airfield, those obsolete planes, were conducive to the basic idea of the film, of the man feeling lost.” -William Wyler

And what a beautiful scene it turned out to be! Check it out in the video below.