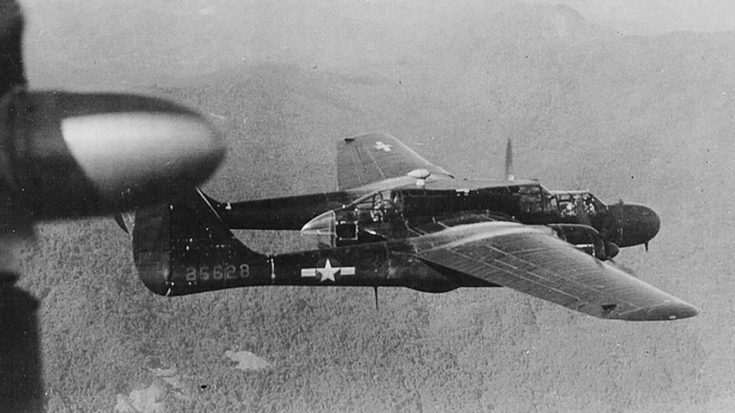 On the night of January 30th, 1945, a lone P-61 Black Widow dominated the sky over a captivated Japanese audience at the Cabanatuan POW camp in the Philippines. It did not attack. It did not run away. Instead, it delivered a darn good air show.

The plane was “Hard To Get” from the 547th Night Fighter Squadron, piloted by Captain Kenneth Schreiber and 1st Lieutenant Bonnie Rucks. They had just received a strange request; their sole mission was to capture the attention of the Japanese long enough for the combined forces of United States Army Rangers, Alamo Scouts, and Philippino guerillas to creep across the open terrain and rescue the 500 Aliied POWs held captive in the Cabanatuan camp. They would be a decoy, a Trojan Horse of sorts.

What followed was a genius theatrical display. 45 minutes before the planned raid, Captain Schreiber cut the power to the left engine at 1,500 feet above the camp. It backfired loudly as he restarted it, dropping 200 feet. He repeated this several times and, playing the part of a crippling plane, he scraped over the nearby hills with only 30 feet of clearance. To add icing on the cake, he performed aerobatics as well. The Japanese were transfixed, anticipating an explosion.

Instead, the Japanese were taken completely off guard and the spectacle allowed the Raid at Cabanatuan to be a massive success for the Allied forces.

Rare And Mysterious- we just don’t see much of them

P-61 Black Widows have a mysterious aura. The story of the Raid at Cabanatuan, for example, would have made for some extraordinary footage. But not a whole lot of documentation exists of the P-61. For one, it was introduced too late in the war to have much of an impact.

Another obvious reason is that the P-61 was a night fighter; the very nature of its existence was to be mysterious. The point of having a P-61 was to have a plane up in the air that could linger around for long periods of time and still have enough reserve to engage the enemy- just like a stealthy, hungry black widow. These types of engagements had turned nocturnal as daylight raids were simply too devastating on all sides. And there’s just not a lot to show from what happened in the night skies of WWII.

You could say that the P-61 is one of those planes you just can’t see enough of, but then again, looking too long might get you killed!

Still, some documentation does exist. Check out this colorized video put together from silent archival footage. There’s a night attack to boot!