The First D-Day Plane – Restored And Ready For 75th Anniversary 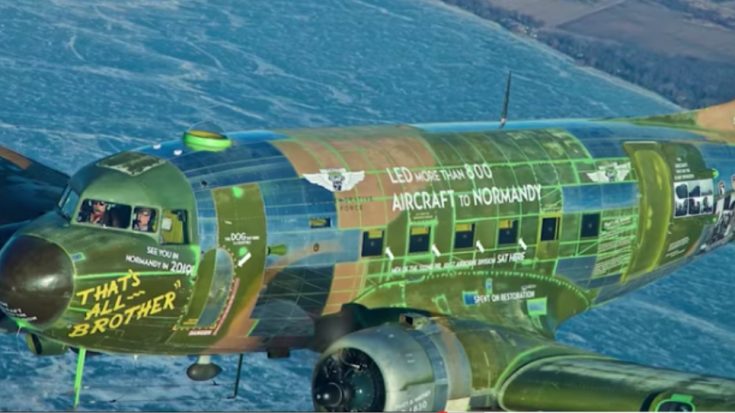 Picture this – it’s June 6, 1944 in Normandy, France. No planes. No paratroopers. Then, the very first C-47 appears on the horizon, commencing Operation Overlord.

“This was number one. This was the lead aircraft and it was called, ‘That’s All Brother’ as a message to Hitler, like he’s done, he’s finished.” – Ernie Lee, member of the Central Texas Wing, unit of the Commemorative Air Force

Discovered In A Boneyard

After service, the grand C-47 was sold to the civilian market in 1945. Over the decades, That’s All, Brother switched hands countless times and her historical significance was lost along the way. Eventually she sold to a scrapyard. Barely a shell of she once was, only her serial number 42-92847 offered any hint to her past.

And that’s how she was found. Staff Sergeant Matt Scales of the Alabama National Guard  had been researching Lt. Col. John M. Donalson who commanded That’s All, Brother, when he discovered exactly where she was. It was one heck of a lucky find!

“This is a modern miracle…The aircraft was within weeks of being torn apart.” – Stephan C. Brown, CAF President and CEO

The restoration project that began in 2015 finally took the the air on January 31, 2018 in Oshkosh, Wisconsin. All that’s left to do now is the interior which will be completed in Tulsa, Oklahoma. The exterior will also be redone to give it its 1944 appearance.

Then, ready just in time, That’s All, Brother, will be flying to familiar territory to take part in the 75th anniversary of D-Day. First she’ll go to Duxford, England, and then it’s on to Normandy.

How insanely cool is that they original leader is back,  seven and a half decades later?

See the video of her first flight below and get familiar because we’re certain you’ll be seeing a lot more of this baby for a long time to come!