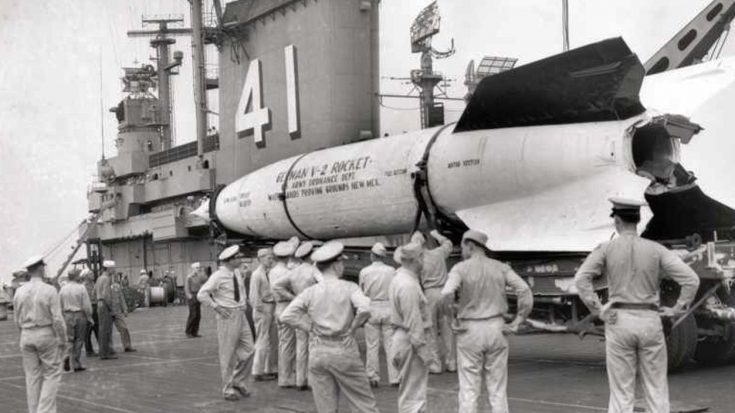 After the end of WWII, American Forces captured many pieces of experimental weaponry from the hands of Nazi Germany. The V-2 Rocket was an interesting weapon of war created by German Scientist Wernher Von Braun. The device could be fired from Germany and hit targets as far away as London, but it lacked accuracy and averaged two kills per rocket. Despite its less than stellar performance, the American military was eager to experiment with long-range rockets as a weapon.

In 1947 the United States Military toyed with the idea of deploying the V-2 Rocket from the deck of an aircraft carrier. When dealing with a gigantic explosive device they realized that anything that can go wrong will go wrong so they took a few precautions. The rocket could misfire, it could tip over or it could even be too powerful when launched.

The US Miltary enacted Operation Sandy in order to assess the risks of launching V-2 Rockets from the carrier’s deck. The USS Midway was the vessel chosen to deploy this captured German weapon of war. The Midway was selected because its size could remain steady after a launch and its steel decks could resist fires unlike other vessels with wooden decks.

The launch wasn’t exactly a success, but it did provide a foundation for the future of long-range naval weaponry. You can check out the less than stellar results of the test firing in this video clip.