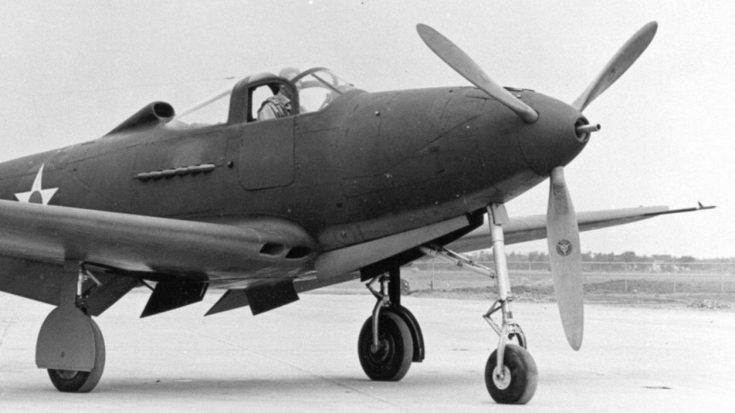 When it comes to ground attack and low level fighting, you’d be hard-pressed to find a WWII plane that could do better than the P-39 Airacobra.

That’s the kind of plane the U.S. Army wanted when Bell hopped on the design. Even though the prototype had turbochargers, Bell ultimately left those out so that they could have a super maneuverable short-winged fighter that could attack ground forces or naval landing parties.

The result was an extremely innovative plane – a cannon in the front, the Allsion V-1710 engine behind the pilot, and tricycle landing gear. It was a great plane for what it was but, unfortunately, it simply didn’t work in the skies over Europe, where the fights were taking place at high altitudes over 30,000 feet. The Airacobra worked best below 12,000 feet.

The Russians Loved Them

The RAF in Britain received their first order of P-39s in September 1941. They flew just one mission before deciding they didn’t want them at all. Through Lend-Lease, they quickly shipped 200 off to the Red Air Force in the Soviet Union. The Red Air Force couldn’t get enough of them.

In Russia, things were different. It was best to fight at low altitude below 12,ooo feet. The Airacobra just so happened to be a perfect match in this environment. The Russians were thrilled with the Airacobra and it was even better that no one else wanted them.

The Airacobra also performed well in the Pacific with American and Australian forces against the Mitsubishi A6M Zero, but was eventually withdrawn in favor of the the P-38.

The Highest Scoring Allied Aces Of The War Flew Airacobras

This may come as a surprise, but the American-made plane flown by the highest scoring Allied aces of WWII wasn’t the Lightning or the Hellcat or even the Corsair. It was the P-39 Airacobra.

The majority of those aces were Russian pilots. Of Aleksander I Pokryshkin’s 59 victories, 48 of them were scored in a P-39. Gregoriy Rechkalov, Russia’s top ace, shot down 56 kills in a P-39.

A total of 4,719 P-39s were sent to the Soviet Union through Lend Lease. We’re just glad that the Soviet Union and the Airacobra found each other. Honestly, it’s probably one of the greatest love stories of all time.