The U.S. “Concrete Battleship” Is Unsinkable Even After All The Punishment It Took 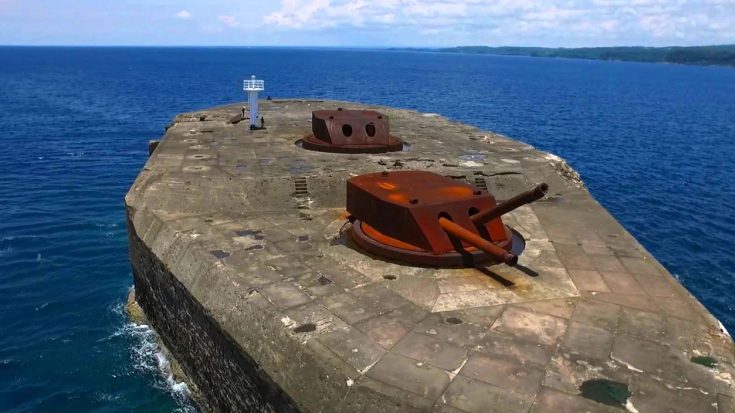 The phrase “too big to fail” is thrown around often but not many things can back up that claim. However, the concrete battleship has withstood over a century’s worth of punishment and stands to this day.

Fort Drum more commonly known as the Concrete Battleship is actually a highly fortified island in the shape of a battleship. It was built by the United States Army after their victory in the Philippines following the Spanish-American War as a means of protecting the bay of Manila which served as a valuable shipping port. It was built over the course of five years using steel-reinforced concrete sometimes as thick as 36 feet. It was equipped with massive armored turrets in the event of a naval attack.

The Concrete Battleship saw the most action during World War II when it came under attack from the Japanese Navy. Beginning in February of 1942 Fort Drum endured an onslaught of attacks from the Japanese forces. The bombing persisted until May of 1942 when the American forces surrendered. Despite the attacks, no American lives were lost and the fort was still standing due to its incredible defenses. Americans would recapture Fort Drum in 1945 and actually had to set fire to the base to clear out the Japanese forces and it was still relatively unscathed.

Over a century later the Concrete Battleship is still unsinkable. We Are Mighty has provided an interesting history on this one of a kind fortress that just won’t fall.