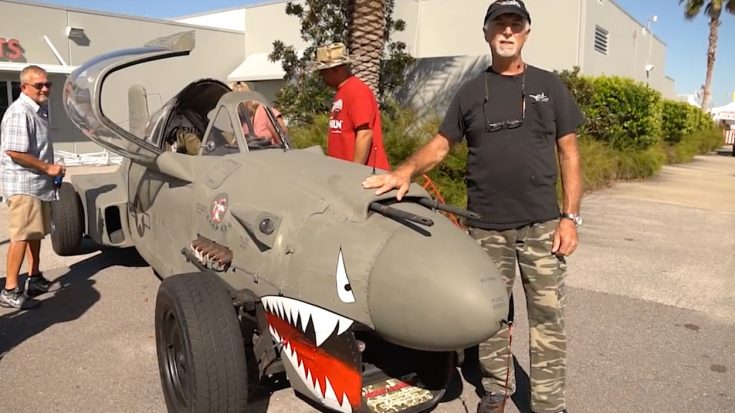 In 2017, the Daytona Turkey Run sponsored a car show before the main event and drew quite a big crowd of Rat Rods. One of them (and arguably the one that stole the show) was the P-40 inspired car we have a video of below.

Jamie Trudeau, an aircraft restorer, had a lot of aircraft parts laying around so he decided to use them to build this P-40 Warhawk inspired machine. Most of the aluminum was taken from a T-28 Trojan and was fabricated by Jamie himself. The kicker, however, is the fact that the car is driven by a real control stick which is something he explains in the video.

We felt like we should give Jamie’s company a shout out because he does such good work. He started restoring aircraft over 40 years ago in New England with his wife and relocated to Florida to partner up with another company.

Over the years, Trudeau Warbird Enterprises earned the reputation of “the most-respected North American T-28 maintenance & restoration facility in the country.” Restoring over 800 aircraft, Jamie’s and his teams’ work was featured many times in various aviation magazines.