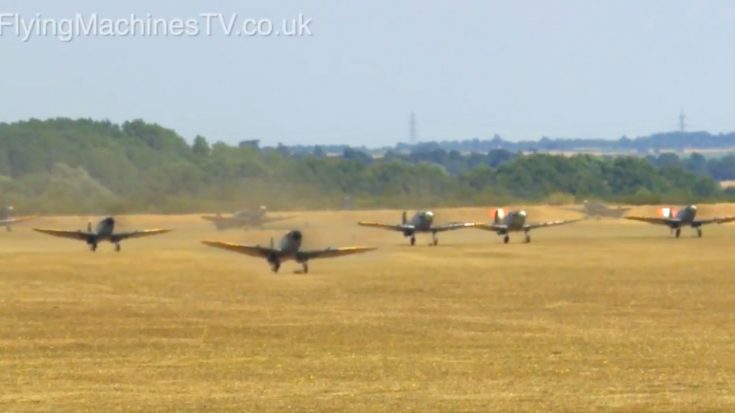 The major fault with many, maybe even most, warbird videos online is peoples’ tendency to add their favorite music to them. As we’ve been doing this for years now and read thousands of our fans’ comments, we can confidently say that doing so is a bad idea as it takes away from the sounds of the engines.

We’re glad to say we just found a new video where this rule was not broken and you can hear the engines of over a half a dozen Spitfires taking off.

The Flying Legends Airshow is an annual, two-day airshow held in Cambridgeshire, England. Typically organized at the beginning of July, it hosts a variety of World War II aircraft. During this year’s (2018) airshow, spectators were able to see everything from the rare Hawker Sea Fury to the Avro Lancaster. Overall, there were over 50 aircraft to see and learn about, making this one spectacular airshow. The video below was taken during this event.

The Spitfire, or Spit as it’s commonly referred to, is arguably the best fighter Britain used during World War II. Shouldering the brunt of fighting on that front (quick shoutout to the Hurricane here as well,) the Spit was produced throughout the war having over 20,000 of them roll off factory floors.

As of today, there are only 54 that are airworthy, some of which you’ll see in the video below.