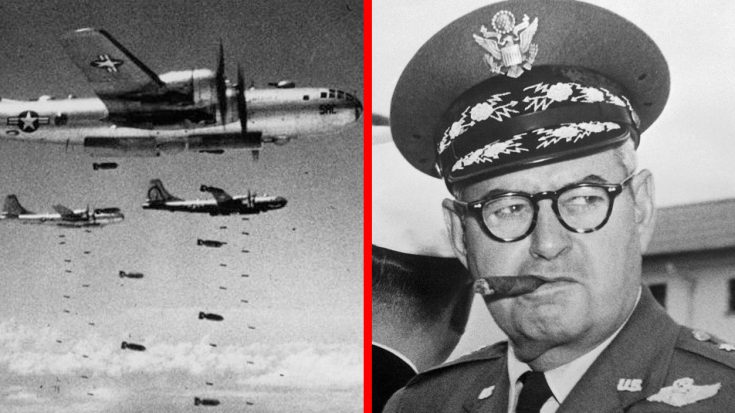 General Curtis LeMay was one of the most controversial figures in the history of the United States Air Force. He did some good things, he did some bad things but he solidified his place in history because of this actions.

Curtis LeMay earned his claim to fame in WWII by implementing bombing strategies for the US Army Air Force the European Theater of War. His success leading bombing strikes over Europe eventually took him to lead bomber groups into the Pacific. However, these initial attacks were not as successful as he had hoped. LeMay insisted that precision bombings were inaccurate due to windy weather and clouds diminishing visibility. Instead, he implemented massive incendiary bombing raids with B-29s dropping countless bombs even on civilian targets. LeMay knew these tactics were questionable and often illegal but they were effective and the city of Tokyo was laid to waste.

“Killing Japanese didn’t bother me very much at the time….I suppose if I had lost the war, I would have been tried as a war criminal….every soldier thinks something of the moral aspects of what he is doing. But all war is immoral and if you let that bother you, you’re not a good soldier.”

Following WWII, General LeMay was dispatched to lead the Air Force in the Korean War. He was very much in favor of the idea of ending the war as quickly as possible and pushed for the use of nuclear weapons. President Truman was opposed to using nuclear weapons in this conflict but Lemay insisted it was the right way to put an end to the war. Truman was clearly not in favor of his idea and implemented rules on nuclear weapons to never be used without the approval of the President.

“We went over there and fought the war and eventually burned down every town in North Korea anyway, someway or another, and some in South Korea too.… Over a period of three years or so, we killed off — what — twenty percent of the population of Korea as direct casualties of war, or from starvation and exposure?”

He had his good moments and he had his not so good moments in his career in Military Aviation. Indy Neidell of The Great War takes a deeper look at General Curtis LeMay’s career and has some not so nice words for him. After watching this video, where do you stand on General LeMay?