Think Military Planes Are Expensive? Just Check Out The Prices Of Missiles 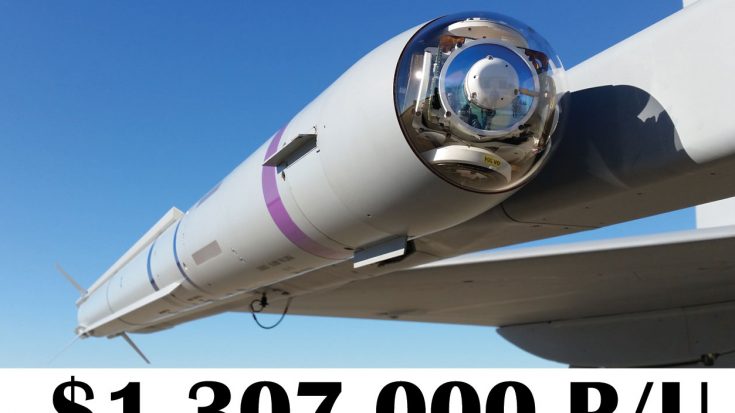 We all love aviation here, so it’s no surprise that when we learned something new we wanted to share it with you. Although not dealing with planes directly, the topic deals with what planes are meant to do in the first place. That thing of course is to blow stuff up.

We read an article on Business Insiders website about the newest guided rocket and although the technology implemented into it is quite mine blowing, so is the price tag.

That got us thinking; how much does your average missile cost?

We did some research and found some pretty interesting figures, but then again there are so many missiles that we didn’t want to give you a boring laundry list of random information. Here’s what we did.

There are three main types of missiles: conventional guided , cruise and ballistic missiles. These three are of course broken down into many different subcategories. Keeping true to our love of aviation, we decided to select the most known and/or newest air-to-air conventional guided missiles, meaning the ones that are used by planes to shoot down other planes.  They’re organized from least to most expensive with other awesome factoids for you to learn as well.

Coming in at last place is the Sparrow. One of the most widely used air-to-air missiles (used by almost two dozen countries), this weapon was used since the ’60s but has been much improved on in terms of guidance and overall effectiveness. It’s a medium-range homing missile that uses semi-active radar to search for targets beyond visual range. It’s used on platforms from F/A-18 Hornets to F-15 Eagles but have been fired by F-4 Phantoms in the past as well.

This advanced short range missile was developed in the United Kingdom. It’s reporting name by the United States is AIM-132. In service since 1998, this is a infrared homing air-to-air missile or in layman’s terms a “heat seeking” missile. Used by the Royal Air Force and Royal Australian Air Force, this missile was developed to phase out the Sidewinder which will be discussed later in the list.

It can be fired from RAF’s Tornados and Typhoons and RAAF’s variant of the F/A-18 Hornet.

This state of the art short range missile is quite a newcomer as it was developed by a German lead program in 2005. Using infrared homing to hit its targets, this missile was designed to replace the Sidewinders (more on that later) used by many NATO member countries. It detonates on impact or can be calibrated to explode in a certain proximity to a target using active radar.

In order to make it more versatile, this missile was developed in order to fit onto any aircraft capable of firing the Sidewinder. That’s most planes we have in service right now.

Produced by Mitsubishi Heavy Industries for the Japan Air Self-Defense Force, the AAA-5 is one of their newest air-to-air short-range missiles.

Operational since 2004, this heat seeking missile is on the same par as the IRIS-T. There is one difference however. Its optical fibre gyroscope homing device makes it capable of LOAL (Lock-on after launch). It means exactly what it sounds like. The thrust vectoring nozzles on the back of the missile and movable control surfaces allow it to lock on to different targets even after the missile has already been fired.

This is sort of the mother of them all. From the Sparrow to the Sidewinder, many air-to-air missiles have been built on this model. It was originally developed by the United States Navy in the 1950s and has since went through dozens of upgrades. As of this writing, it is the most widely used missile in the world.  It is responsible for shooting down 270 aircraft over the course of its service.

This is the newest yet most expensive missile out there today (air-to-air.) Another variant of the Sparrow,  this missile can be fired both day and night no matter what the weather conditions are. These missiles alone are responsible for shooting down 9 aircraft (mostly Russian MiGs) as of 2008. Although the A-C variants cost anywhere between $300,000 to $400,000, the D variant which is the newest hits the price out of the ballpark.

The AIM-120D has 50% more range than its predecessors, better kill probability as well as GPS navigation and many other perks. This is pretty much the missile of the future. It does however, cost $1,786,000 a pop.