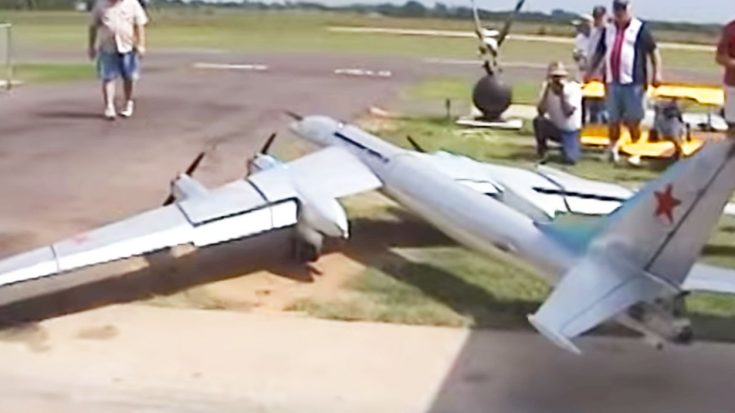 Typically when we find videos like this, we like to do a bunch of research and give you as much information about the build as possible. In this one however, there is barely any information when it comes to it. We can make a few assumptions though.

According to the description of the video, this model has a wingspan of 21 ft., 6 in. That’s all we know for sure. Also, the folks in the back are speaking English so we’re assuming this Rc airshow took place somewhere in the States.

As for the speculation part, here’s something to chew on. This video was taken back in 2009. The Rc plane featured is by far the biggest and most detailed Tu-95 we’ve ever seen. Now, that’s the only video of it. We’ve looked and looked and this is the only one on Youtube. This leads us to believe that unfortunately, that thing must have crashed and burned soon after.

The real Tu-95 has been deemed one of the loudest plane ever made. With its four engines that have dual props, it’s a well-documented fact that some crewmembers lose some hearing when they ride in them for a prolonged amount of time. Although this Rc is not overly loud, it’s probably the loudest we’ve heard on Youtube.