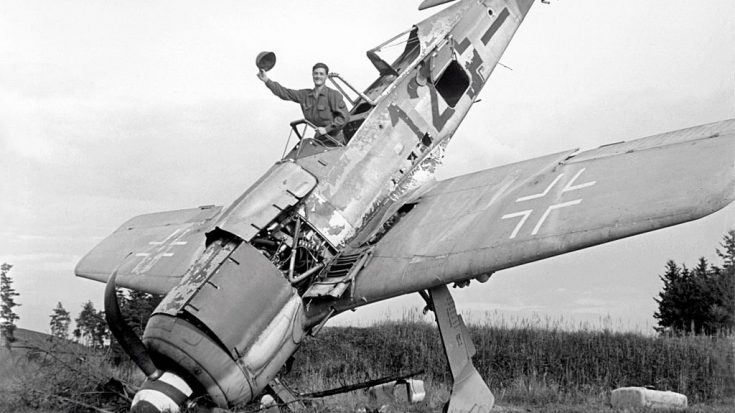 On April 16th, 1943, twelve German Focke Wulf 190s engaged in a sporadic night raid over Britain. Not doing much damage, they broke away and headed for home. But instead of crossing the English channel back to German occupied France where they thought they were headed, four of the pilots crossed over the Thames estuary from south Essex into Kent. They were still in Britain.

Everyone involved in what happened next was about to get a big surprise.

A Loud Crash Is Heard

The first pilot must have been happy to see West Malling Control Center, mistaking it for a Luftwaffe base. But we’ll never know. Unfortunately for him, he had to bail when his plane stuttered due to its lack of fuel. His parachute didn’t open and he was killed. The loud crash, however, alerted the watch officer that something unusual was going on.

Then came the second plane. It practically waltzed right up to the control block. Not yet realizing his mistake, the pilot shouted for ground crew as the mechanics gawked in amazement. They had practically just been gifted a Focke Wulf 190 in pristine condition. It wasn’t until a Beaverette armored car raced over, the driver leaping out to  wrench the rudder over, that the German pilot suddenly became aware of his somewhat awkward predicament. He surrendered immediately.

The capture of the third plane required a bit more effort. The moment the pilot touched down, he saw the Beaverette car racing towards him and tried to take off. But the Beaverette wasn’t about to let him get away. The car opened machine gun fire on the Focke Wulf 190, causing it to burst into flames. The pilot, also in flames, was captured after a brief ground struggle.

As if that was not enough action for one day at the runway, one more German pilot came in. This one, though, undershot the runway and crashed. The pilot was badly injured before he was captured.

It was a productive day at the Malling Control Center. The mint condition Focke Wulfe 190 was repainted in RAF colors and extensively test flown, revealing valuable data. Thanks for the mistake, Germany!

See the full story in the video below.