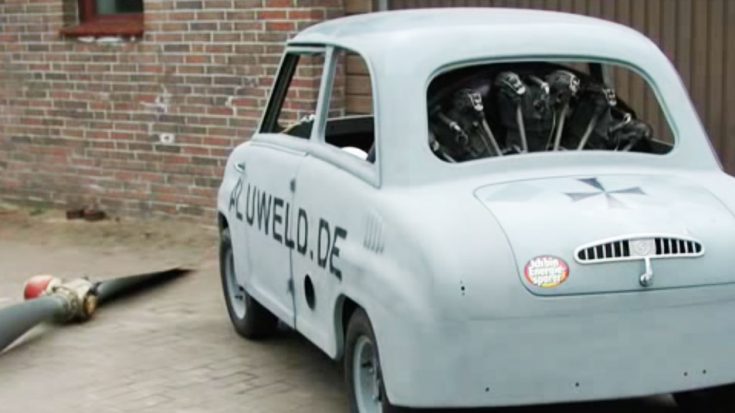 Welcome to Germany, a place where aviation exploded during World War II and some of the most innovative designs came from. Some 70 years later and they still don’t seem to disappoint even when it comes to some DIY designs born in someone’s shed.

While looking for some interesting facts to share with you folks we came across a very crude, 10-year-old website from Germany. It was a catalog of Uwe Wulf’s journey of putting a radial engine into the back of a tiny European car and to be honest, we were blown away that it actually worked.

Let’s start off with the car. Named the Goggomobil, this tiny car was produced by a company called Hans Glas GmbH in Germany from 1955 to 1969. They came in a few shapes and sizes including the two-door sedan pictured below, a coupe and convertible. Over the years, the company produced almost 215,000 of them.

Since those cars were abundant, Uwe built this thing by first stripping the entire car down, reinforcing it, of course, and fabricating many of the parts himself as hooking up the transmission to a radial is not exactly something you can buy at your local store.

The engine of choice for this build was the M14P, a Russian made nine-cylinder radial engine dating back to the 1940s. Producing about 360 hp and 400 hp by the time its final variant went into production, this was a very widely used engine for many experimental and stunt aircraft at the time.

Some of the more known companies that applied this engine were Sukhoi and Yakovlev.

You can find a video of the build below. The first part is various pictures the guy took throughout the years as he built the car from the ground up and finally, the startup.