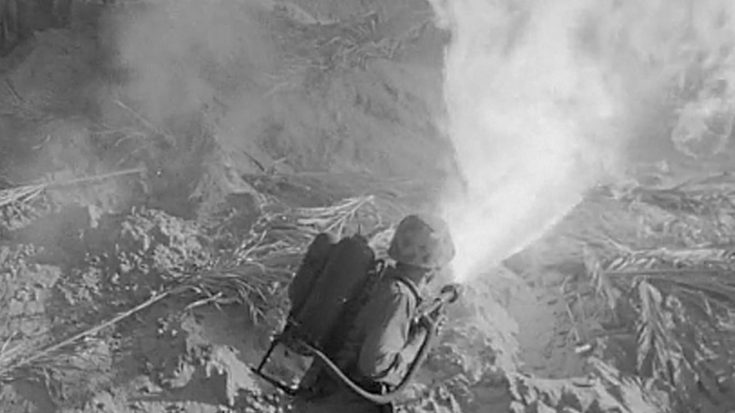 94-year-old WWII veteran Hershel “Woody” Williams was recently honored with a Navy Vessel named in honor. He earned the Medal of Honor for acts of great heroism on the island of Iwo Jima during WWII. Surprisingly he won a victorious conflict against the Japanese using a flamethrower.

While six marines were erecting a flag over Iwo Jima that went on to become one of the most iconic symbols of WWII Hershel “Woody” Williams got to work because he knew the fighting had only just begun. Iwo Jima was heavily fortified with Japanese pillboxes covered with sand and artillery rounds were making a scratch on them. The marines couldn’t advance without getting those pillboxes out of the way. The leader of Williams’ unit noticed that Williams was armed with a flamethrower and ordered him to sneak up on the pillboxes.

What happened next was one for the history books as Williams went on a rampage taking out Japanese soldiers. Fortunately, he wasn’t the tallest guy around so he could sneak under machine gun fire and then send an inferno into a pillbox. He even got above a pillbox and stuck the end of the flamethrower into its ventilation pipe and burned them from the inside out.

In total Woody Williams destroyed seven Japanese pillboxes that day and saved countless American lives from being torn apart by Japanese guns. Upon his return to the United States, he was awarded the Medal of Honor by President Truman for heroism in the face of extreme danger.

“Unyielding determination and extraordinary heroism in the face of ruthless enemy resistance were directly instrumental in neutralizing one of the most fanatically defended Japanese strong points encountered by his regiment and aided in enabling his company to reach its objective.”

Well into his 90s Hershel Williams still takes up an active role inspiring military members throughout the United States. The military story series Violent But True recalls Woody’s amazing story in this video.