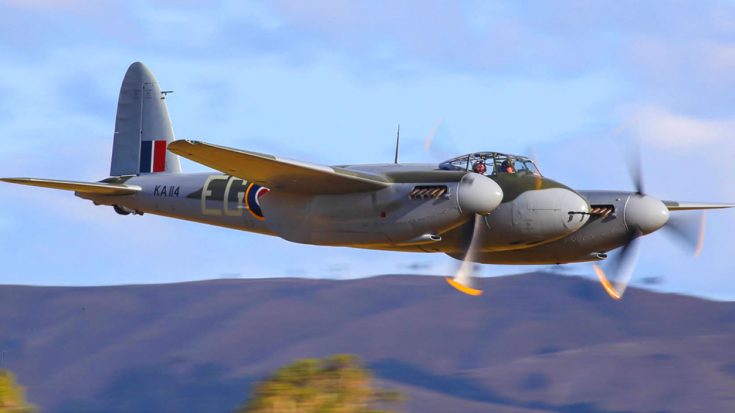 The De Havilland Mosquito was a medium-sized bomber used by the Royal Air Force during WWII. What set apart the Mosquito from other bombers was its remarkable speed, hitting upwards of 360 miles per hour. This fast bomber did so well in battle and achieved incredible speed from its wooden airframe.

As WWII pressed on, metal became scarce in Great Britain and but the RAF still had a great need for more planes. They turned to aircraft engineer Geoffrey De Havilland to design a bomber that could get the job done. He designed it out of wood and utilized the many out of work carpenters to craft the airframes for De Havilland Mosquito.

“Because furniture factories, cabinetmakers, luxury-auto coachbuilders and piano makers could quickly be turned into subcontractors. Because wood, particularly when covered with a thin layer of doped fabric, makes a remarkably smooth, drag-cheating surface free of rivets and seams. And battle damage could be repaired relatively easily in the field.”

Aside from its wooden airframe, there were several other innovative features that were integrated into the Mosquito. This light bomber lacked guns, which helped to increase speed as well as focusing completely on bombing attacks. Bombers such as the B-17 Flying Fortress were slower due to the excessive weight of gun turrets and crew to operate them. Since then many other bombers followed suit taking away guns, everything from the RAF Canberra up to the B-2 Spirit.

The De Havilland Mosquito enjoyed a short reign as the world’s fastest plane for just a little over two years before other aircraft outpaced it. The Wooden Wonder helped win the World War II and change the world of aviation. For a demonstration of the Mosquito’s speed check it in this clip.