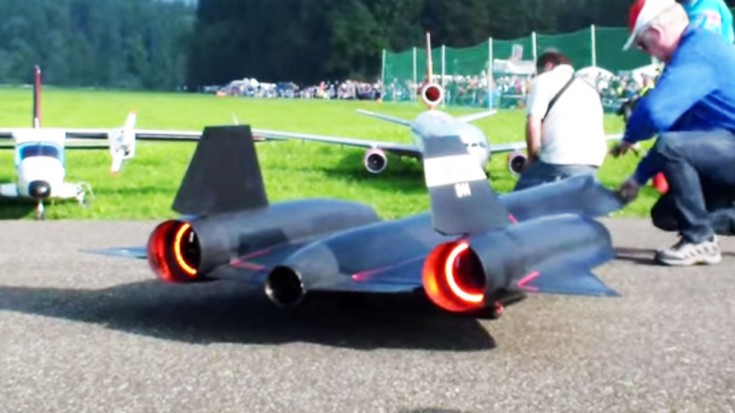 This Is One Of The Coolest RCs You’ll Ever See.

This giant SR-71 was built by Lothar Heinrich, a Germany Rc hobbyist who will stun you with both his flying skills and his craftsmanship. 8 feet wide and almost 15 feet long, this SR-71 is powered by two Jet-Cat P200 engines which also have led lights inside of them to replicate the look of an afterburner. An already fantastic machine, you have to admit that the lights were a nice touch.

Introduced to the Air Force in 1966, the SR-71s were the fastest planes ever produced and that was just 20 years after World War II!

This talented warbird enthusiast also shows great taste as he build one of the most unique planes ever designed. The SR-71 is the baby of Lockheed’s Skunk Works Division, a group tasked with future and secret projects. Coming out of such a great facility, it’s no wonder that the Blackbird was an engineering wonder and a great success. Able to reach a top speed of 2,200 mph, their main defense was simply flying faster than missiles shot at them. Although no longer in service, we can at least get a taste of this awesome machine thanks to the hard work of men like the guy in this video. Enjoy.