Throaty Start Of Avenger Once Owned By Bob Odegaard 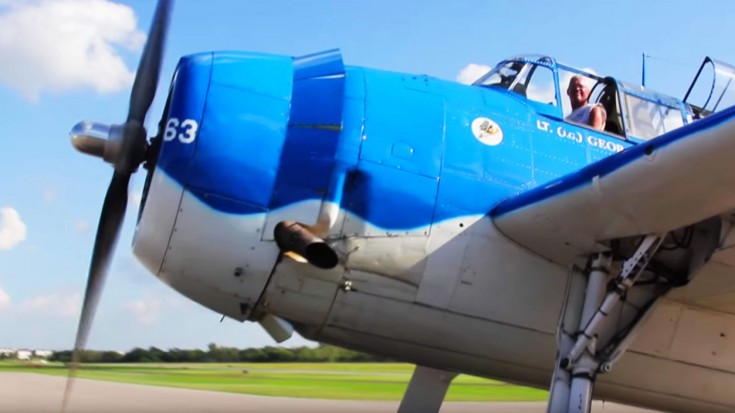 Those Startups Really Get Us Fired Up!

This Grumman Avenger, Bu. no. 53768, stopped by for a quick refuel while on the way to her hangar in Joliet Regional Airport. One of the people on the tarmac knew what they had in front of them and to our bliss recorded the startup after refueling. Crank the volume and see for yourself how awesome this thing sounds.

Tracking this warbird down through the warbird registry, we have deducted that it was built in 1943 but never saw any action during World War II. Almost a decade after the war it was used by the U.S. Forestry Service in California and then as a tanker in Newcastle, Wyoming.

This Avenger is a TBM-3U variant which is pretty much a “general utility and target version.”

From the mid 70s to the mid 80s she was used for aerial spraying but then was acquired by the legendary pilot Bob Odegaard. Most of you know who he was, but for those of you who don’t, we’ll give you the unfortunate rundown.

He was an accomplished pilot and racer who clocked in over 17,000 flying hours over the course of his career. Also, he was known for meticulously restoring warbirds, which in the end added to the tragedy. In 2012, Odegaard crashed his Super Corsair which took his life.

Today, this Avenger is now owned by Thomas Buck from Illinois.