Lightning And Eagle Fly Shoulder To Shoulder: Aviation At Its Finest 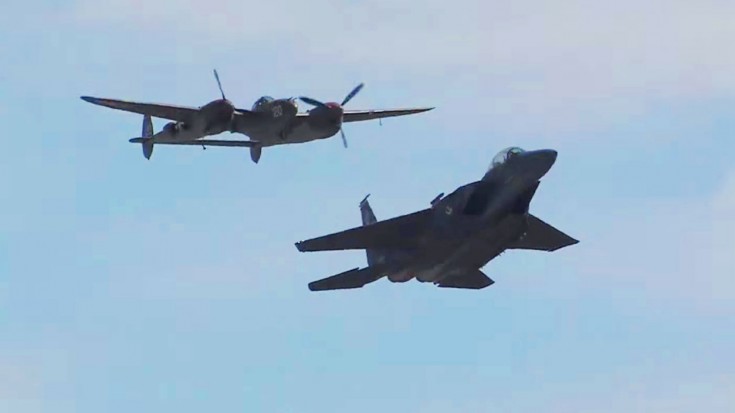 It’s a rare sight to see fighter planes designed almost a half a century apart flying together, but here we are. This high quality footage was recorded at the California Air Show in 2010 and features non-other than the P-38 Lightning and an F-15 Strike Eagle. Both significant fighters, they fly together in formation and do a couple of passes to the thrill of spectators. The P-38 Lightning was one of the most versatile fighter planes during World War II, and was produced throughout the war. The F-15 on the other hand, also a very capable fighter, was developed in the early 70s and is projected to be in service at least until 2025.

Established in 2004, the California Capital Airshow has become one of the largest and highly respected air shows in the nation.

The Lightning was developed by Lockheed and designed as a fighter, but adapted to many roles. It served as a dive bomber, night fighter and a photo reconnaissance plane among other things. The F-15 Eagle developed by McDonnell Douglas, (now Boeing), is also quite versatile aircraft. Designed as an all-weather tactical fighter, it has ground-attack capabilities but is mostly used as an air-superiority fighter.