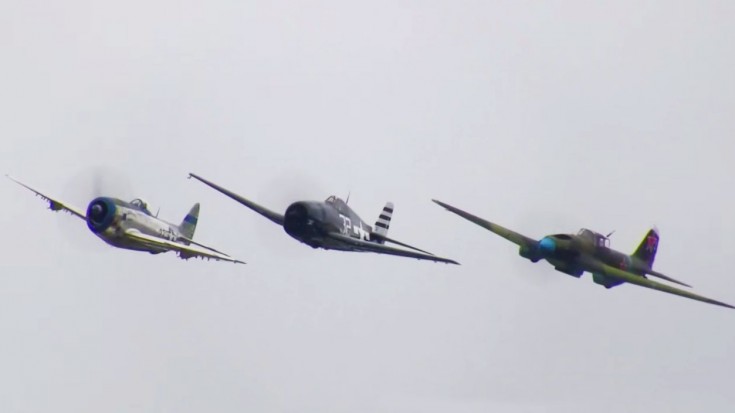 To Make This Even Better You Will Catch A Glimpse Of A Tigercat Too!

This awesome collection of World War II warbirds was shot during the Paine Field Aviation Day in 2015. Featuring our favorite fighters the Hellcat and Thunderbolt, the Flying Heritage Collection also brought with them a rare bird, the II-2 Shturmovik. This Russian built plane is the only airworthy survivor in the world and was restored by Retro Avia Tech. It first flew after restoration at the end of 2011, and is now owned and operated by Paul Allen’s Flying Heritage Collection.

Here are some notable facts about these warbirds:

These three planes are legendary, and it’s quite a treat to see them fly in formation. What’s more, the Grumman Tigercat also joins in half way through the video. These warbirds were the first twin-engined fighters to join the Navy’s arsenal, but were deemed too large for deck landings. They served well when given to the Marine Corps, but missed the action in World War II.