Top 10 Fastest Military Jet Aircraft- Is #1 Even a Surprise? 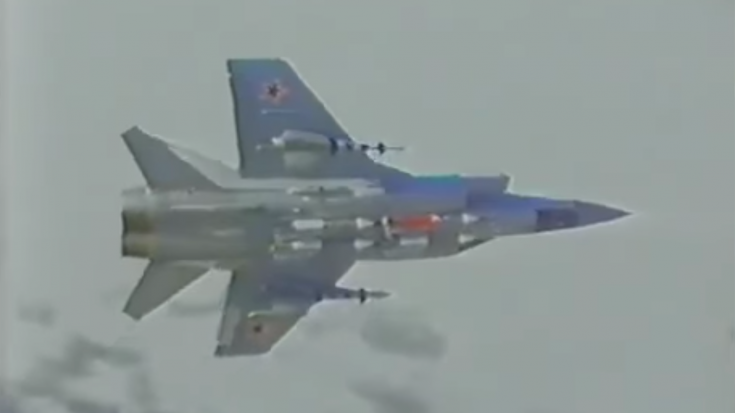 All of the fighter jets on this list exceed the top speed of 2.0 Mach. Speed and agility are both important factors for aerial dominance. And if anything, the following fighter jets only prove that aviation engineering and technology has truly come a long way.

At the time of its development, it became of the finest aircraft ever made. It was originally designed to compete with the legendary Grumman F-14 Tomcat and the McDonnell Douglas F-15 Eagle. From the moment the Su-27 was introduced, it became an instant classic. It was equipped with features and capabilities which are deemed necessary to dominate the skies – heavy ordnance, high maneuverability, impressive range and sophisticated electronic systems.

“Sukhoi designed the Flanker with the capabilities of the F-15 Eagle firmly in mind, and the aircraft that emerged resembles the fast, heavily armed, long-ranged Eagle in many ways. Whereas the Eagle looks healthy and well-fed, the Flanker has a gaunt, hungry appearance.” – Robert Farley writing for The National Interest

While its basic design was similar to the Mikoyan MiG-29, the Su-27 was significantly larger. Aside from air superiority, it also ventured into other roles such as ground attack aircraft and interceptor.

This tactical strike aircraft may have had numerous problems during the earlier part of its development but it eventually went on to perform a wide array of roles such as aerial reconnaissance, interdictor, strategic nuclear bomber and electronic warfare plane. It also played a huge role in influencing other variable-sweep wing war birds (the F-111 being the world’s first operational aircraft of this kind) since it employed various cutting-edge technologies in its system.

“When streaking past enemy defenses at altitude wasn’t an option, the Aardvark relied on another brand new technology: automated terrain-following radar, similar to what Tomahawk cruise missiles and other ground-hugging aircraft utilize. What’s more, thanks to the plane’s Pave Tack avionics, the F-111 offered unsurpassed situational awareness—able to find, target, track, and destroy enemy installations—regardless of weather or daylight conditions.” – Andrew Tarantola

The F-111 Aardvark was far from being perfect but it did its job and did it well.

Earlier this year, CNN reported that the US Air Force is considering retiring the F-15 Eagle even though it has already proven its worth many times over. Besides, it’s undefeated in air-to-air combat. Fortunately though, last March, there was a proposed upgrade to this legend such as staying of the opponent’s radar. They will also add a communication pod and Talon HATE sensor .

“For nearly three decades, the F-15 Eagle fighter was considered the undisputed king of the skies. Until the debut of its replacement, the F-22 Raptor, the F-15 was the U.S. Air Force’s frontline air superiority fighter. Even today, a modernized Eagle is still considered a formidable opponent, and manufacturer Boeing has proposed updated versions that could keep the airframe flying for the better part of a century.” – Kyle Mizokami

Even without the upgrades, the F-15 can still boast of excellent maneuverability and acceleration, weapons, avionics and of course, speed.

MiG-31 Foxhound is a supersonic interceptor aircraft which was ahead of its time. Originally developed to replace the MiG-25 “Foxbat” (which was fast but lacked agility), the MiG-31 is best known for being one of the fastest combat jets with a top speed of 2.83 Mach. The MiG-31 may look almost exactly like the MiG-25 but it had powerful engines and features low-altitude lethality.

“Dubbed the “Flying Radar” by its pilots, the MiG-31 carries the distinction of being the first aircraft with both a phased array antenna and passive electronically-scanned array radar. This allowed each Foxhound unprecedented detection capabilities—they can spot as many as 24 individual objects at a range of 200 km and track eight of them simultaneously, while the onboard computer determines the four most threatening pings and automatically locks R-33 long-range air-to-air missiles onto them.” – Andrew Tarantola

Just how effective is the MiG-31? It can intercept even the legendary SR-71 Blackbird. Yes, you read that right.

This is one of things which could’ve displayed greatness. The XB-70 is the prototype version of the planned B-70 which was supposed to replace the strategic bomber Boeing B-52 Stratofortress. Unfortunately for the B-70, it had little additional performance over the BUFF and so the program was eventually canceled in 1961 with only two XB-70s built. The XB-70 was developed with the ambition to be the ultimate high-altitude, high-speed manned strategic bomber but it was in the late 1950s when manned bombers were deemed obsolete.

“The B-70 was expected to easily outrun any enemy interceptor aircraft—the only effective weapon against bomber aircraft at that time. The Valkyrie would spend only a few minutes over a particular radar station, flying out of its range before the controllers could vector their fighters into a suitable location for an interception. Its high speed made the aircraft difficult to see on radar, and its high altitude could not be matched by any contemporary Soviet fighter.” – Chris Clarke

The Valkyrie was advanced in terms of aeronautical engineering. At the time, it physically looked like a plane from the future.

This is an experimental rocket-powered, swept-wing research aircraft which was built for the purpose of explore the flight characteristics of those in the Mach 2-3 range. It also investigated the stability and control effectiveness at high speeds and altitudes, supersonic flight aerodynamic problems and structural effects of aerodynamic heating. It was in 1957 when the Bell X-2 set the record for the fastest aircraft speed when it reached Mach 2.87 with Lt. Col. Frank “Pete” Everest at the controls.

“Once [the rocket is] going … you’re hanging on and trying to fly a prescribed flight path to give you the best performance. This isn’t easy to do, because you have to climb and try to get to about 60,000 feet, then level off and perhaps dive a little to try and get the maximum Mach number out of the airplane. You do this until your propellants are exhausted and then head home. Simple as that.” – Lt. Col. Frank Everest

Everest, however, noticed some flaws including pressure shifts and possible stability problems at Mach 3.

This supersonic interceptor and reconnaissance bomber aircraft was already a record-setter from the very beginning and it was considered as one of the fastest military aircraft to ever be in service. One notable feature is that it was built using stainless steel which was pretty rare in combat aircraft at the time. Also, the MiG-25 was the last plane personally designed by MiG co-founder Mikhail Iosifovich Gurevich before he retired.

“Bearing a wicked name, a forbidding profile, and some great stats, the Foxbat looked like a world-beater. Combining exceedingly high speed with high altitude tolerance and a heavy weapons load, it looked as if the plane could contribute effectively on the Central Front while also helping to immunize Soviet airspace from U.S. penetration.” – Robert Farley

The thing is, it was designed to intercept the XB-70 Valkyrie which unfortunately, was ultimately scrapped. Still, the MiG-25 served various Soviet air forces for decades.

Another experimental aircraft, the Lockheed YF-12 was a fighter-interceptor and a twin-seat version of the reconnaissance aircraft Lockheed A-12. It set world records during flight testing and was only surpassed later on by the SR-71. Although the military never adopted the YF-12 as an operational aircraft, one of its greatest contributions is perhaps that it was a precursor to the iconic SR-71.

“The YF-12 allowed NASA researchers at all four of the agency’s aeronautical centers (Langley, Lewis [now Glenn], and Ames as well as the Flight Research Center) to study the thermal, structural, and aerodynamic effects of sustained, high-altitude, Mach 3 flight. Painted flat black, the YF-12 was fabricated primarily from titanium alloy, which enabled it to withstand skin temperatures of over 500º F.” – NASA

Some of the YF-12s may have continued service with the USAF and NASA but the whole program was eventually abandoned after the F-12B production was cancelled.

The SR-71 Blackbird was best known for easily outrunning threats. It would operate at high speeds and altitudes during aerial reconnaissance missions. Out of 32 aircraft built, the 12 were lost due to accidents but nothing was lost to the enemy. And well, that says a lot about this plane’s capabilities. It was an effective spy plane and is still being hailed as the fastest plane ever built. During its 25 years of service, not once was it hit by a missile.

“The Air Force decision to retire the Blackbirds in 1990 is based on several factors. In congressional testimony, Air Force Chief of Staff Gen. Larry D. Welch identified the increased survivability of reconnaissance satellites, SR-71 vulnerability to the Soviet SAM-5 surface-to-air missile and the cost of maintaining the SR-71 fleet. The cost factor is the most significant to the Air Force because it limits expenditures in other areas. Reagan Administration Air Force Secretary Edward C. Aldridge Jr. estimated that the money used to operate the SR-71 fleet could operate and maintain two tactical fighter wings.” – Los Angeles Times

Maybe one of the greatest ironies is something that’s so fast and powerful is currently just sitting in a museum.

Basically, this is THE fastest plane ever built. A hypersonic rocket-powered aircraft, its official world record was set by aeronautical engineer and pilot William John “Pete” Knight on October 1967. Even as of June 2017, the X-15 has remained unchallenged. It was built to pioneer technologies for hypersonic flight and also gathers information on how aircraft materials, structures and control surfaces would perform at very high altitudes and hypersonic speed.

“Because of the large fuel consumption of its rocket engine, the X-15 was air launched from a B-52 aircraft at about 45,000 feet and speeds upward of 500 mph. Depending on the mission, the rocket engine provided thrust for the first 80 to 120 seconds of flight. The remainder of the normal 8- to 12-minute flight was without power and ended in a 200-mph glide landing.” – NASA

The X-15 had a total of 199 research flights which were deemed the most successful flight research program in aviation history.