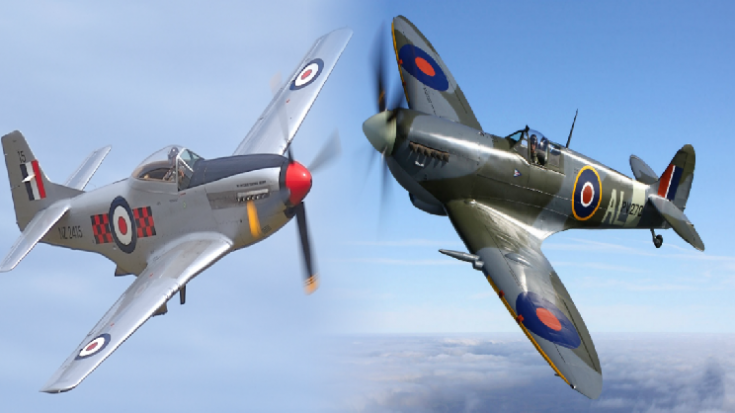 It’s not easy picking the top 11 fighter planes from World War 2 — some had an edge in speed and maneuverability, others relied mostly on firepower. But somebody had to do the ranking so here we’ve rounded up the best war birds that dominated the skies during the bloodiest war in human history:

A powerful dogfighter, the Yakovlev Yak-3 was small and light but robust all the same. Its excellent performance was a huge surprise to the Luftwaffe – they started to fear this low altitude fighter-interceptor when they found out it could out-climb, out-turn and even out-accelerate their Focke-Wulf 190 and Messerschmitt Bf 109.  Much loved by pilots and ground crews, its unmatched maneuverability coupled by an impressive rate of climb made it a tough aerial opponent with a stellar kill-to-loss ratio. It was most especially valuable on the Eastern Front because aerial battles took place at low altitudes. Almost 5,000 Yak-3s fought against the Luftwaffe and thus solidified its worth from the moment it was unleashed against the enemy. Owing to its highly impressive design and power armament, it’s no wonder it has become legendary. However, despite all that, this tactical fighter is also known for being easy-to-handle by both novice and well-experienced pilots.

Also called ‘Reisen’ or ‘Zeke’, the Mitsubishi A6M Zero served as a nasty shock to the Allied Forces. Being the primary naval fighter of the Imperial Japanese Navy, it was a legendary dogfighter with very long range and incredible maneuverability. It boasted of speed and impressive endurance. It was a formidable fighter with a kill ratio of 12 to 1. In the Pacific Theater, it could easily best its ground-based counterparts thus swiftly earning a legendary reputation. During World War 2, it became the Japanese aircraft with the most number built and produced. It wasn’t just a symbol of their air superiority and power, it also paved the way for numerous innovations in naval aviation. Faced against the Grumman F4F Wildcat, Brewster F2A Buffalo, and the Curtiss P-40, it could out-maneuver them all. Yes, it was indeed a tough opponent – a very lethal fighter in dogfight. It also took part in various devastating attacks against the Allied forces.

In the Battle of Britain, this was Germany’s primary fighter where it engaged with the Royal Air Force’s Spitfires and Hurricanes as they battled for air superiority – one of the keys in achieving the downfall of the British Empire. At the time of its inception, the Me 109 was the most advanced fighter platform. It featured a retractable landing gear, all-metal monocoque construction and closed canopy. This war bird was flown by some of the highest-scoring German fighter aces namely Erich Hartmann, Hans-Joachim Marseille and Günther Rall. It is also the most produced fighter plane. Its main disadvantage was limited range but that was offset by its advantages over every other war bird – in fact, it could escape trouble faster than its enemy planes. It was respected and feared by its opponents – it can be quite a handful to the Allied forces.  Further developments and innovations to the design addressed a number of pilot complaints.

The “Wildcat’s big brother” was specifically designed and built to counter the Zero. It was so powerful that it was known to ‘makes aces out of pilots’ and even nicknamed ‘ace maker’ by some. That is, it can help shoot down at least 5 enemy aircraft for every aerial combat. It had a rugged but straightforward design and its standard armament included six heavy caliber air-cooled machine guns. As a follow-on to the Wildcat, some of the Hellcat’s upgrades and innovations were increased ammunition capacity, more powerful engine, improved armor plating in the cockpit, and a wider landing gear. It proved a potent and effective force against the Japanese and by being maneuverable, robust and extremely powerful; it’s easily one of the top fighters during World War 2. It was easy to handle and operate but could still outperform enemy planes. And with a kill ratio of 19:1, it accounted for so many aerial victories.

This served as the backbone of the German Fighter Force and along with the Messerschmitt Bf 109, helped deliver a ‘one-two punch’ to the opponents. At low to medium altitude, it proved superior in terms of maneuverability and firepower to the Bf 109. The FW 190 also offered better protection for the pilot with massive bulk up nose and the BMW engine can sustain massive battle damage AND STILL be able to fly home. Should the engine fail, belly landings were less hazardous than dead-stick ones. It’s widely considered as the best fighter plane of the Luftwaffe and despite looking a tad bit small, it was sturdy. In fact, legend has it that one FW-190 with a shot cylinder head was still running and even made it back to base. That’s one among many reasons why this war bird is well-loved by both the pilots and crews. It’s a real badass.

Combining higher victory-to-loss ratio and lower attrition rate, it had a better overall performance than the Hawker Hurricane. It was well-loved not just by the pilots but by the people too for the most part because it was glamorized by the media. Some would even describe it as: “Like strapping on an angel’s wings”. And while people during the war could hardly tell Hellcat from the Yak-3, most of them could easily identify what a Spitfire looks like. It’s extremely famous like that. At the Battle of Britain, this is the only war bird that could match and rival the German fighters – it’s the British undisputed champion of aerial warfare. It was during that time when it became an aviation legend. With a high rate of climb and devastating firepower, it’s no wonder why it has become a symbol of victory. From its superior specifications to the groundbreaking design, the Spitfire has played a crucial role in a number of important battles.

It was the world’s first operational jet fighter and it was one of the most advanced designs at the time. It was notably faster than any fighter plane which is why the Allies would often attack it while it’s still on the ground or before it takes off or lands. Although it had some engine reliability problems, it served as a huge influence in the designs of planes like Boeing B-47 Stratojet and North American F-86 Sabre. Mustang pilot Bud Anderson once encountered the Me-262 and just as he was about to close in, he said the aircraft “just shrank up and vanished.” Unfortunately, it will always be a ‘could have been’. If the materials have been readily available and it was handled by experienced pilots, it could’ve been a real game changer for the Germans. It had great potential for superiority in aerial warfare in Europe. But then again, we’ll always end up with a bunch of ‘what if’ scenarios.

Affectionately called the ‘Jug’, the P-47 packed a devastating and deadly punch. It features a powerful Pratt & Whitney R-2800 Double Wasp engine and robust airframe which allowed it to deliver ‘dive and zoom’ attacks. The P-47 is often regarded as the real workhorse of the Allies and it was highly effective in both ground attacks and high-altitude aerial combat as a short-to-medium range escort fighter. The Jug’s contribution to air and ground warfare across all major theaters during World War 2 is unrivaled. It wasn’t as beautiful as other classic war birds but it delivers and it gets the job done. With a powerful engine and robust airframe, it was highly effective for ground attacks. The Jug means business and it’s the kind of foe enemies feared to face. It was fearsome, deadly and extremely tough. And it was reliable – it could take a beating and still fly home safely.

The ‘fork-tailed devil’ was unusually quiet thanks to the turbo-superchargers. It had distinctive twin booms which made it easier to identify and gave it a rather radical look. It was originally designed to fulfill the role of bomber-interceptor instead of fighter. It was versatile, fast and powerful. In the European Theater, it flew more than 130,000 sorties. It gave a devastating performance owing mostly to its innovative design. The next variants were given some refinement and upgrades. It was unique but effective all the same. It was highly and easily recognizable when it takes to the skies. If you’re wondering about the twin-boom, it was so the power of two fully-operating engines can be utilized. The armament was extremely formidable against opponents – from the machine guns to the cannons, it screams ‘deadly’ in big, bold letters. It looks graceful with its clean, sleek lines and though it had some problems and faults, it’s still one heck of a war bird.

There were problems with its carrier landing performance which was why the Navy had to opt for the Hellcat but eventually, the handling issues were resolved. The Corsair was rugged and it boasted of speed, maneuverability and firepower which made it capable of going toe-to-toe with the legendary Zero. It was often referred to as the ‘Whistling Death’ because of its distinctive sound. It may not look as pretty as other war birds but it could certainly outclimb and outfight most of them. Although it’s an exceptional machine, it was difficult to maintain. Nevertheless, it earned a legendary status in aviation – not only did it gain the fear and respect of its Japanese opponents but it made quite a name for itself during World War 2, more specifically in conflicts in the Pacific Theater but it also participated in the Korean War and some French-related Cold Wars. Powerful and fast, it’s one of WWII’s best naval fighters.

It’s the most celebrated US fighter plane during World War II. It proved to be invaluable to the Allied Forces especially since the Mustang could outperform its opponents. Armed with six .50 caliber (12.7 mm) M2/AN Browning machine guns, it claimed air superiority against every other war bird it was up against. 275 pilots who flew the Mustang earned the ace status. Robert Goebel of the 31st Fighter Group commented that although this aircraft can boast of its speed, turning ability and rate of climb; “one thing that really set the Mustang apart from any other fighter, friend or foe, was its range.” It was the addition of the Rolls-Royce Merlin engine that dramatically and significantly improved this aircraft’s performance. In the European Theater, the Mustang was the highest scoring US fighter. While there have been several upgrades, modifications and innovations to other variants, the North American P-51D Mustang will always be among the aviation elite.