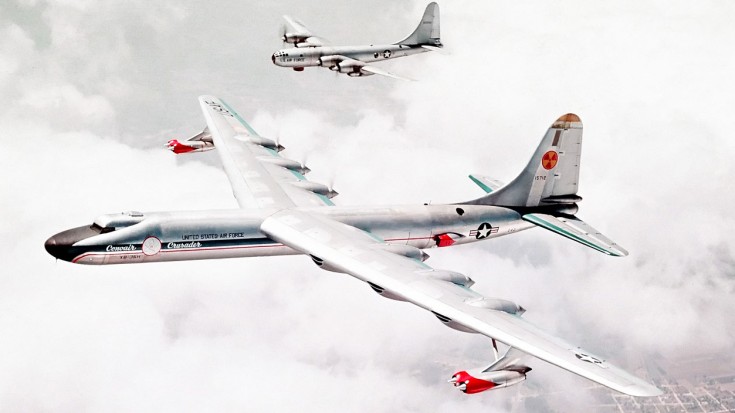 The B-36 Peacemaker Was A Guinea Pig From The Start.

In an effort to create the first nuclear powered aircraft that was capable of flying indefinitely, the United States started NEPA (Nuclear Energy for the Propulsion of Aircraft.)

Using B-36 Peacemakers which were designed during World War II but were’t operational until 1949, the program installed a 1 MW, air-cooled nuclear reactor in the belly of the aircraft. The first flights did not use the reactor for propulsion however, but was meant to study radioactivity around the plane and its impact on flight systems.

In order to protect the crew in the cockpit, a 101,000 lb. lead wall was placed between the crew and reactor and the windshield was made of 12 inch thick leaded glass.

In just under two years, 48 test flights were completed in the modified B-36. With a chase aircraft behind the Peacemaker at all times, both crews collected data from the surrounding air and carefully studied how the reactor behaved on a mobile platform.

Although a brilliant idea, many factors contributed to the program being shot down in 1961 by John F. Kennedy. Beside the obvious reaction of citizens being worried about a nuclear reactor flying over their homes, advancements in aviation during those years didn’t justify the program’s cost. Spending almost a billion dollars on a 15 year program that didn’t have any future foreseeable results, the budget was reallocated into the advancement of jet powered aircraft.