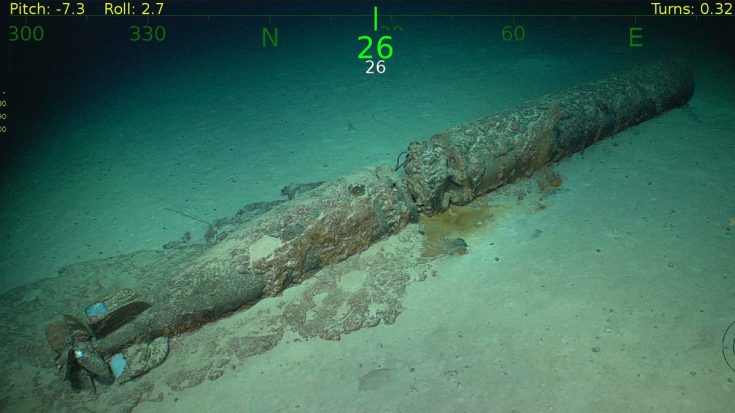 The USS Lexington was discovered off the east coast of Australia at a depth of 3 miles beneath the surface. A crew led by Microsoft co-founder Paul Allen has been relaying new imagery from the wreck site and there have been many fascinating finds. One of the images is actually an undetonated torpedo not far from the vessel and it has a story to tell.

During World War II, the USS Lexington was among the few aircraft carriers serving in the Pacific. Massive battleships were growing to be outdated and aircraft served as the mainstay of battle. This resulted in the USS Lexington having the first carrier vs. carrier combat where the vessels were nowhere near each other. Sadly attacks from Japanese aircraft proved to be too much for the USS Lexington and it was rendered dead on the water.

To prevent her capture at the hands of the Imperial Japanese Navy, the USS Phelps was forced to target the crippled carrier by firing five torpedos at her. This is one of those torpedoes which did not detonate upon impact. However, it still marks an important point in history and to the sacrifice of the USS Lexington going down in history as “The ship that saved Australia.”

New image of an undetonated torpedo near the wreckage site. Of the 5 torpedoes USS Phelps launched to scuttle the USS Lexington, we believe this was likely one of the two that were duds. #RVPetrel pic.twitter.com/NKo0t1siCa