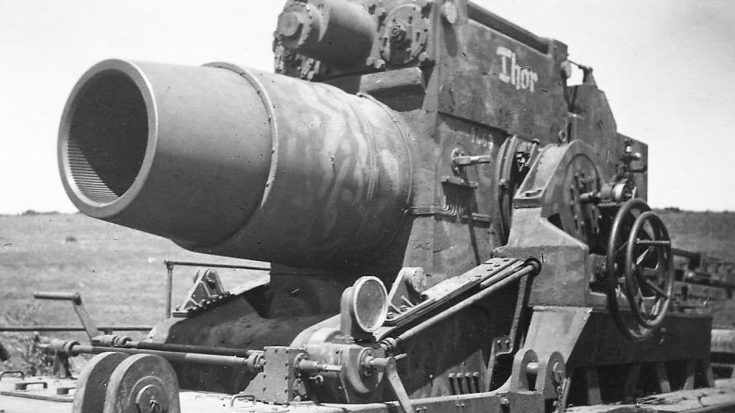 Nazi Germany developed many incredible weapons during WWII to combat the invasion of the Allied Forces. Many weapons inspired fear but were all but useless in battles such as Battleship Bismark and Schwerer Gustav railway gun. The German military eventually would make better use of large artillery pieces with the development of Karl-Geräte howitzers.

The Rheinmetall company constructed seven huge mortars named after gods, the most popular of the set was the Thor. The Thor mortar was a little more practical in use than its larger cousins Dora and Gustav. As a self-propelled artillery piece, it was far more mobile than other big German guns which required railway transportation.

“The Mortar Karl was instrumental in the German offensive against the Allied forces when they battled in the Bulge. It is also recorded that Mortar Karl was used in their attempt to bring down the captured bridge at Ludendorff, the battle at Remagen.”

During Operation Barbarossa as the Germans began their invasion of Russian territories, the Thor was used a siege weapon for the Warsaw uprising and the assault on Sebastopol. It was a powerful vehicle but it was not without its weaknesses in the field of combat. If the Karl mortar was unguarded it was very vulnerable to attacks from tanks who target it with relative ease. Accuracy was another issue they dealt with, as well as difficulty loading its 2-ton rounds which slowed its firing rate to once every ten minutes.

Not entire practical for combat the Karl mortar was better suited as a psychological weapon. German troops felt much more confident in the presence of such a large weapon and the sight of it helped to quell uprisings. The Karl Mortar did get off some lucky shots in the few combat missions it saw, check them out in this clip.