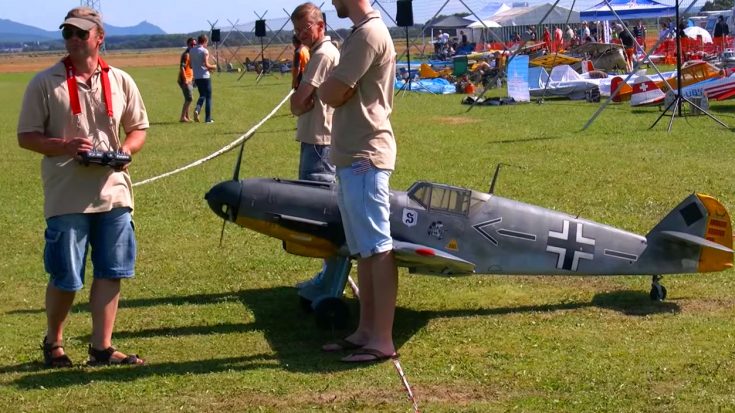 In early 1937 a plane debuted that changed aerial combat over the skies of Europe, the Messerschmitt Bf 109. This plane served as the backbone of the German Luftwaffe with close to 34,000 of them produced during WWII. The infamous fighter that made a name for itself during the Battle of Britain has been given a new life as an oversized RC model plane.

The Bf 109 was a fighter that evolved into other roles such as reconnaissance, ground attacks, and as an escort. The Bf 109 would see nine variants and was the plane fighter of choice for Erich Hartmann, WWII’s top Ace Pilot. It went relatively unchallenged for German air supremacy until the emergence of the Focke-Wulf Fw 190 in 1941. Superior numbers couldn’t keep the Bf 109 and as the Americans entered WWII the Bf 109 struggled to compete against their fighters.

“By war’s end, only a few hundred Bf 109 G’s and K’s were left to face the massive Allied air fleets. Over 34,000 of Willy Messerschmitt’s fighter had been built and consumed in furtherance of Hitler’s destructive ambitions.”

The 2016 Euroflugtag Rheidt was graced with the presence of this mighty RC model Bf 109. Turn your volume up because this plane gets really loud when it buzzes through the air.