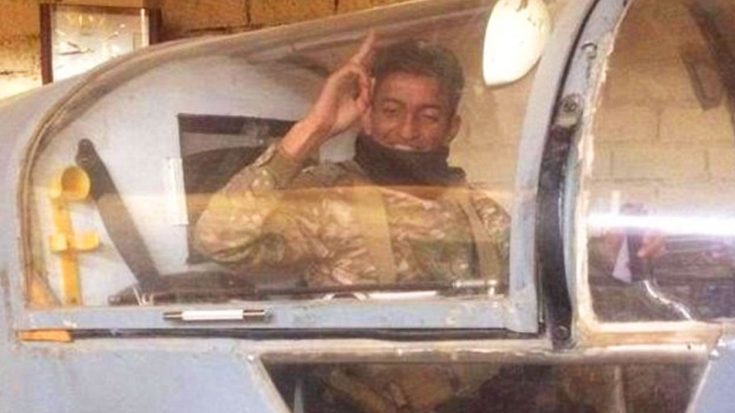 For several years the militant group ISIS has been terrorizing the Middle East as they push for power. After a brutal battle in the city Mosul, US-led Iraqi troops scored a victory against ISIS forces and investigation of an outpost went underway. During the investigation of the ISIS base, the Iraqi troops uncovered their attempted Air Force and it’s pretty abysmal.

Some photographs have been released by the Iraqi military of ISIS’s weak attempt at an air force. Their secret weapon is literally a bare-bones cockpit with no wings, engine or weaponry. As you can see in the picture, the Iraqi soldier posing with the ISIS plane can barely contain his laughter as he investigates their lackluster air force.

The Air Force of the Islamic State Terrorist group may be a complete joke, but the enduring conflict is no laughing matter. The attacks by ISIS forces have left nearly 150,000 civilians homeless in the ensuing carnage that lasted for months.

“US-backed Iraqi government troops announced on Wednesday they were in ‘full control’ of eastern Mosul, three months since the major operation started.”

Troops don’t have to worry about ISIS pilots anytime soon but in this video from Mosul the conflict is still very real.