This Truck Racing A WWII Plane Is ‘Shocking’ 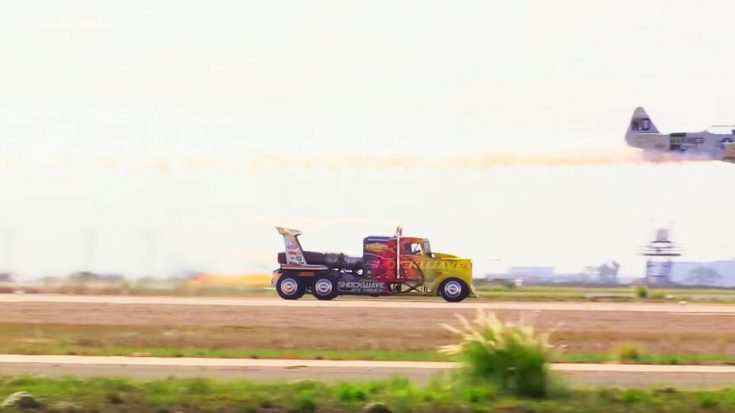 This is a real treat during most Blue Angel’s shows. The reason we said shocking by the way in the title, is because this truck is called Shockwave. And for good reason.

When you go to see the Blue Angels, that’s who you’re there to see. That’s a no brainer. Considered by many the best aviators in the world, the show they put on is spectacular. The event takes up the whole day however, so you’re treated to a couple different spectacles. One of them is a semi-truck powered by a frickin’ jet engine.

The engine which powers Shockwave is a Westinghouse J34 which was used for powering the Banshee, Skyknight and Neptune planes.

Originally a Peterbilt semi, this thing’s no joke. It holds the world record for fastest land speed by a semi truck, hitting 376 miles per hour. This allows it to complete a quarter mile in 6.63 seconds. That’s pretty insane.

What is even more insane is the amount of horsepower this truck has. 36,000 to be exact. This allows it to do a quarter mile race with a plane and win. Check it out for yourself.