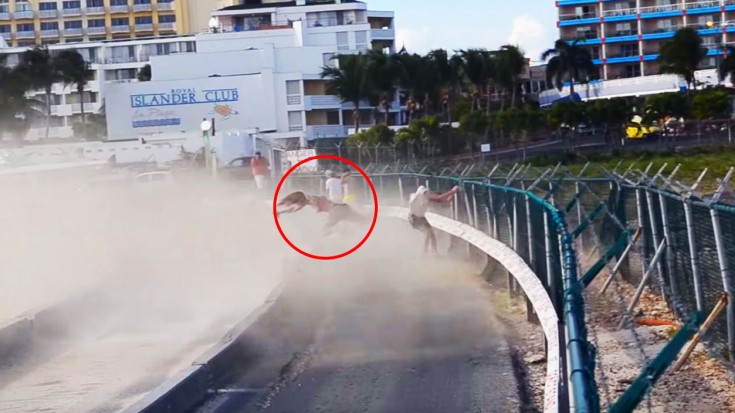 Welcome to Sint Maarten (Saint Martin), a vacation island in the Caribbean. Its a paradise that most of us would love to visit, but it also offers something incredibly special for aviation enthusiasts.

Runway 10 which handles a lot of arriving and departing traffic to and from the island became an attraction all to itself.  It’s only several hundred feet away from the ocean and Maho Beach. When huge airliners come in, they’re usually less than a hundred feet from people sunbathing on the beach. If you love planes, this is the place to be.

She might have smashed her head, but we wouldn’t show you this if something serious happened. She was fine, just a bit beat up.

There is a flip side to the proximity of the runway to the beach however. On takeoff, people on the beach are typically blown right off the sand and into the ocean. With the plane throttling up, the jet blast literally blasts people, but for some even that’s not enough.

Some brave/foolish souls come in even closer. The fence that separates the runway and the beach is sometimes used by such people as an anchor in their attempt to brave the jet blast. Although some are successful as they flap there like flags at full mast, some, like the girl in the video, can’t hang on. Check out the video to see what the repercussions are.