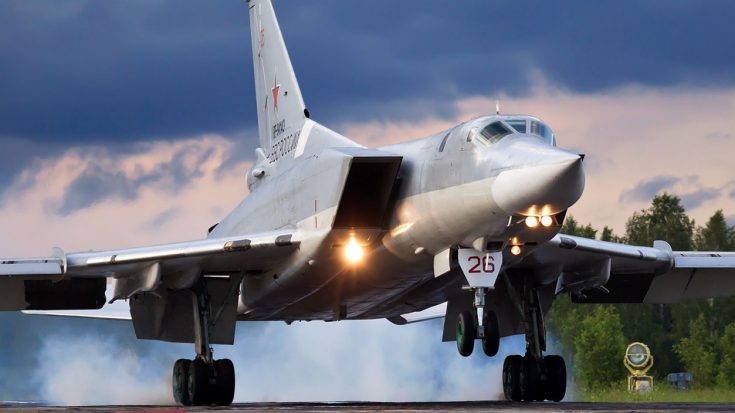 The rarely seen Tupolev Tu-22 (Blinder) is a beautiful aircraft and the first supersonic bomber in use by the Soviets. Designed in the 1950s, the Tu-22 found a role bombing enemy ships during the Cold War. Tupolev would build only 311 units between 1960 and 1969 serving the Air Forces of the Soviet Union and Ukraine.

Restrictions on this supersonic bomber so only permitted pilots with experience in the Tu-16 were able to fly it. Reaching a top speed of Mach 1.42 and able to carry 20,000 lbs of bombs it is quite formidable. Despite its impressive speed and arsenal, many consider the Tu-22 a failure due to a range of only 3,000 miles.

“During the Cold War, the Tu-22M was operated by the Soviet Air Force (VVS) in a strategic bombing role, and by the Soviet Naval Aviation (Aviacija Vojenno-Morskogo Flota, AVMF) in a long-range maritime anti-shipping role. Significant numbers remain in service with the Russian Air Force, and as of 2014 more than 100 Tu-22Ms are in use.”

The Tupolev Tu-22 remains in use as a viable bomber and reconnaissance aircraft. This video shows an inside look at a Tu-22 blasting a target during a bombing mission against ISIS.