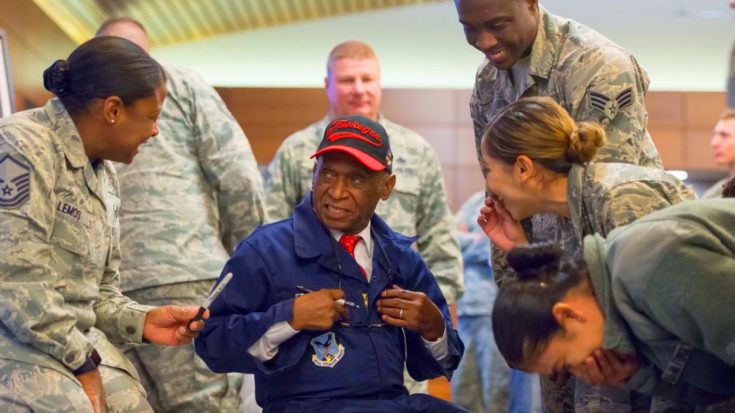 Staff Sergeant Leslie Edwards Jr. is one of the few remaining Tuskegee Airmen still with us today. At age 93, he has been around the block a few times and learned many lessons about war, planes. Edwards still has a few lessons to teach the new generation of pilots on how to succeed.

In 1943 Leslie Edwards was drafted into the United States Army Air Forces as part of the 477 Bomb Group. Edwards served as a mechanic on B-25s, making sure they were ready for combat against the forces of Nazi Germany.

Joint Base Elmendorf-Richardson is home to the current 477th Fighter Group, a squadron of F-22s that represents America’s first line of defense against Russia. In celebration of their 10th Anniversary, they brought Leslie Edwards to join their quality assurance inspector on his 5,000th aircraft inspection. It was a monumental occasion where Edwards told them an important lesson in the legacy of the Tuskegee Airmen who started the 477th.

The entire base was really inspired by the visit from such an icon. You can view the whole film of Edwards stay at Joint Base Elmendorf-Richardson in this clip.