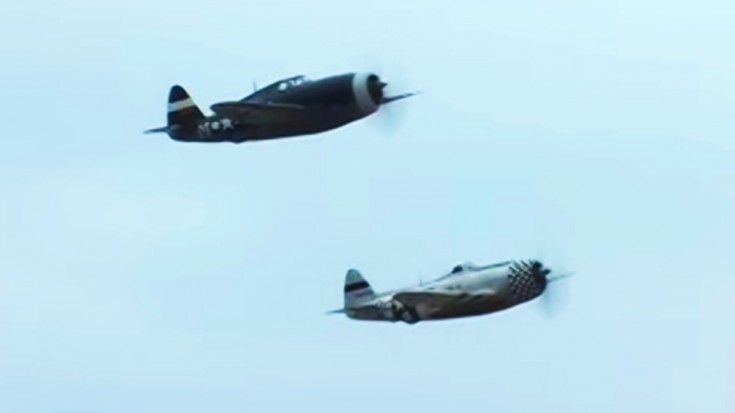 Nothing But Beautiful Sounding Jug Flybys!

P-47 Thunderbolts, or Jugs as they were called due to their milk bottle appearance, were one of the most formidable fighter-bombers to fly in World War II. Armed with eight Browning machine guns capable of dispersing about 800 rounds per minute per gun, being in their sights was usually the last thing you ever did. To add to this impressive armament, Jugs could also load up to 2,500 lbs. of bombs, half the load of the infamous B-17 Flying Fortress. They were used extensively both in the European and Pacific Theaters in a variety of roles.

“There were many U.S. pilots who preferred the P-47 to anything else: they do not agree that the 190 held an overall edge against it.”- Jim Goodson, U.S. World War II ace

It was difficult for some pilots to get use to flying the Thunderbolts, as their sheer weight made them incapable of performing certain maneuvers. To remedy this, new tactics were developed. Initially, to outmaneuver German fighters for example, P-47 pilots used their great roll rate and dive capabilities to lose Bf 109s and Fw 190s. Thunderbolt pilots were trained to use every tactical advantage, ending the war with almost 4,000 air-to-air kills and 746,000 sorties.