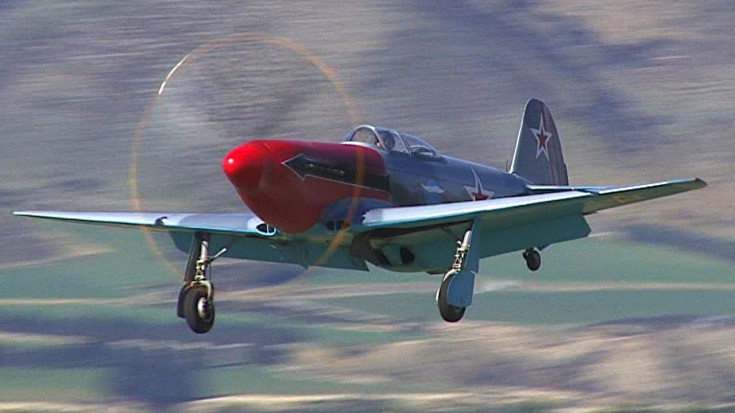 Although intended as an alternative to the heavier Yak-1, the Yakovlev Yak-3 proved its worth in battle and was soon considered a more efficient aircraft than its predecessor. Its light fuselage provided great maneuverability, greater even than that of other small and famous one-seat fighters like the Supermarine Sptifire.

Although a prototype of the Yak-3 was developed as early as 1941, the Soviet plane reached mass production stage much later, in 1944. The delay was caused by both an aluminum shortage and the increasing danger of the Nazis reaching Russian territories. In the short span of only 2 years, the Soviets built almost 5000 of these small fighters.

While the Yakovlev Yak-3 still looked a lot like the Yak-1, the newer model suffered many improvements. One of them was the position of the cockpit, which allowed greater visibility for the pilot. The decreased weight helped with the climb rate and overall maneuverability of the aircraft.

The Yak-3 was equipped with one ShVAK type cannon, having a 20 mm caliber and two 12.7 Berenzin heavy caliber machine guns. The latter were designed to fire through the propeller hub. In regards to defense, the small fighter was fitted with improved armor, at least in comparison to the YAK-1.

The I-30 prototype, the one created in 1941 was equipped with a Klimov M-105 P engine, however, as the war went on, the Yak-3 received an upgrade in the form of the Klimov VK-107, a V-12 that was capable to develop 1,700 horse power. The engine change helped the plane achieve speeds well over 400 miles per hour.

The Yakovlev Yak-3, which was incredibly easy to maintain, managed to gain fame rather quickly. Its kill ratio against the Luftwaffe was impressive while the losses were minimal. Best used in dog fights at lower altitudes, the Soviet fighter remained in use for many years after the end of World War 2, and not only by the Soviets.