Ultimate Video Shows Why Our Naval Aviators Are The Best 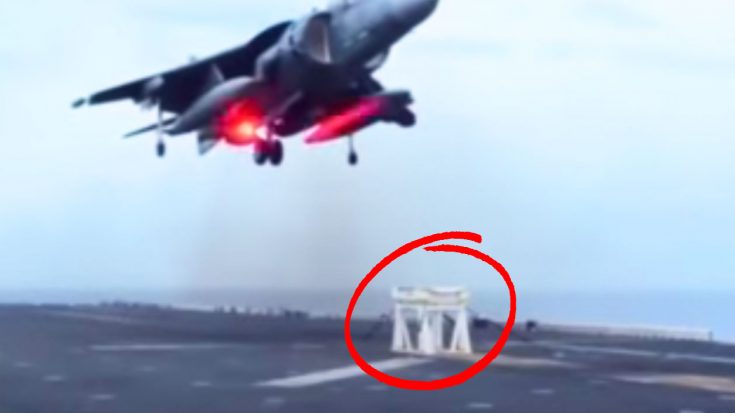 At The End There, It Simply Became A Controlled Crash.

It was just another day of flying for Captain William Mahoney, a pilot who took off the USS Bataan back in 2014. Preparing to land, however, he got a ‘gear malfunctioning’ signal from his HUD, forcing him to turn around to get the situation assessed by someone on the flight deck.

Flying a Harrier, Captain Mahoney was able to hover right by the tower of the carrier to get information as to what was happening. As it turned out, his front landing gear was not extending, so Mahoney was in for a tricky landing.

The Harrier was developed by the British as the first aircraft capable of vertical/short takeoffs and landings commonly referred to as V/STOL.

Captain Mahoney was lucky, however, because onboard the USS Bataan was a special device for exactly these types of emergencies, namely, a stool of sorts. That’s right, a very hefty stool that had the curvature of the underside of a Harrier’s nose that would fit neatly in case of nose gear failure.

What was unfortunate however was the fact that Mahoney had no way of seeing where this stool was when trying to land, so he simply landed the aircraft in the exact spot he always did. The precision displayed here is absolutely incredible.

For the rest of the story, watch the video!