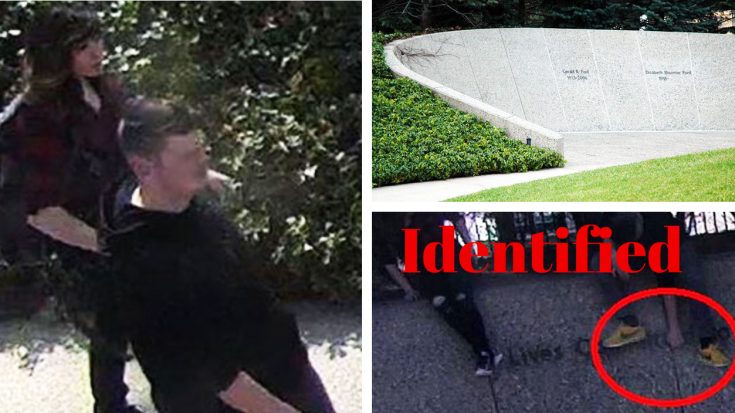 On March 27th, 2019, a security camera caught two unidentified skateboarders, seemingly in their teenage years, vandalize former President Gerald Ford’s and his wife Betty Ford’s gravesites in Grand Rapids, Michigan. You can see the security footage that’s been released to the public below.

The vandals are first shown to kick a skateboard and hit the side of the monument in a carefree way, only to do more physical damage to the gravesite later. They hoisted themselves on top of the monument when the male started chipping away at the lettering, reportedly succeeding at prying away the letter “e” from the sign that read, “Lives Committed to God, Country and Love.”

“We look at this as extreme vandalism,” said  Joel Westphal, deputy director of the presidential library. Destroying public property, especially of historical significance, is a grave offense and the police as well as members of the Ford family, are looking to get the culprits apprehended and charged. The extent of the damage is valued at about $400.

The local police department is looking for any leads and help from the public to identify the vandals in the video below. If you have any information regarding this incident, you can contact them at (616) 456-3400.

As this act of vandalism spread beyond the local news after the surveillance footage was shown nationally, the two people in the video decided to step forward. The Grand Rapids Police Department did not release their identity, however, they did write this on their official Facebook page: