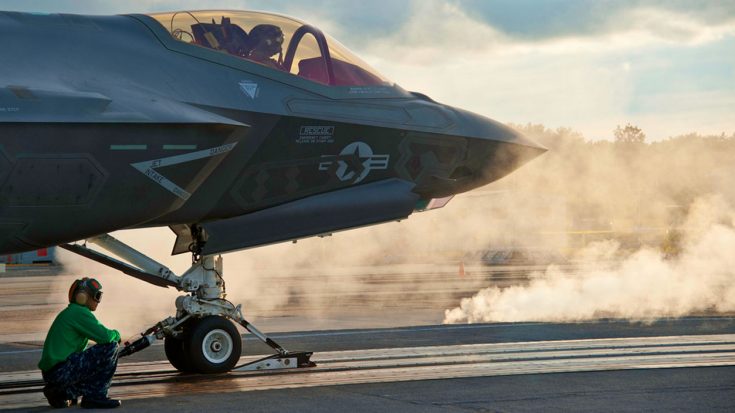 The Lockheed-Martin F-35 remains a controversial figure in the world of military aviation. The multirole fighter jet has been delayed by safety issues ranging from engine explosions to ejection seat malfunctions. One way or another it is inevitable that it will end up in operation so until then the issues must be addressed for the pilots who will fly them. The United States Navy is offering a solution to another error that has been plaguing the F-35, the catapult launch.

Navy pilots have voiced complaints about stability when the F-35C is launched from a catapult. These complaints include excessive shaking of the jet, a tendency for the nose to dip down. Reports from 105 tests on the USS George Washington confirmed that over 74 pilots experienced pain these launches.

“Fleet pilots reported that the oscillations were so severe that they could not read flight critical data, an unacceptable and unsafe situation during a critical phase of flight. Most of the pilots locked their harness during the catapult shot which made emergency switches hard to reach, again creating, in their opinion, an unacceptable and unsafe situation”

These issues haven’t been publicized as much but share a striking similarity to the F/A-18 Hornet in its early testing phases. The issue may lay in the pullback force of the catapult paired with the weight of the helmet, creating this discomfort. However, if those facts are not to blame then it may be within the nose, which could take years to redesign.