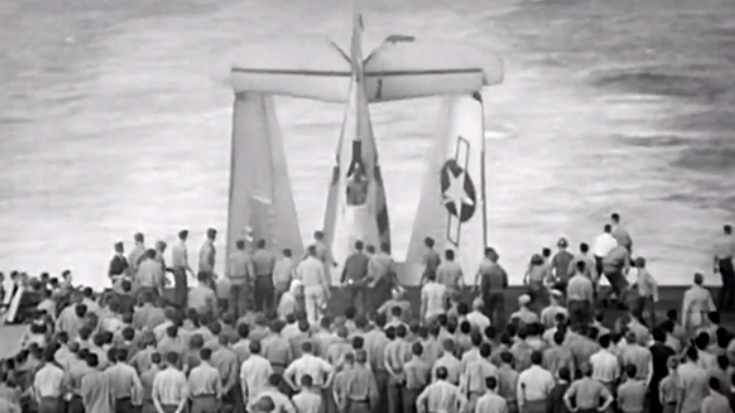 During times of war, sailors are lost in combat and bodies on board vessels creating some less than desirable conditions. A burial at sea is necessary for disposal and echoes thoughts of the burning Viking ships. Just one man was buried at sea with his plane during WWII, this is his story.

Loyce Deen had dreams of joining the United States Navy long before the nations was thrust into World War II. In 1942, he enlisted and began training as Grumman Avenger gunner. Deen served in the Air Group 15 aboard the USS Essex and set off for the Pacific Theater of War.

Air Group 15 would endure some of the most ferocious aerial combat of the Pacific. During the Battle of Leyte Gulf Loyce Deen took anti-air shrapnel in his foot. Despite his injury, he continued his mission but continued to fight against the Imperial Japanese Navy. He turned down a hospital stay and joined for Air Group 15 again, knowing he would be home by Christmas.

“Coming in through the most intense and accurate AA yet experienced, the squadron made three hits on one battleship, two hits on another battleship, and two hits each on two different heavy cruisers.”

On November 5th, 1944, Loyce Deen set off to join the Battle of Manila Bay. Sadly, Deen’s heroism couldn’t prevent the inevitable. During the battle, Loyce was hit by anti-aircraft fire from a Japanese cruiser. The pilot Lt. Robert Cosgrove flew the plane for two hours back to the USS Essex. Loyce Deen’s body still in the gunner seat.

Beyond repair, barely able to fly and not worth it to strip for the Avenger spare parts. The US Navy made the decision to give Loyce Deen a burial at sea inside that plane for his heroism. This archival footage shows the send-off ceremony for Loyce Deen.