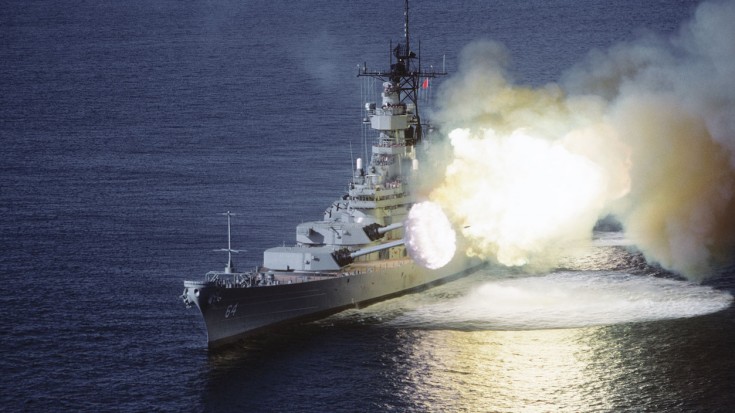 The USS Missouri (BB-63) was also called “Mighty Mo” or “Big Mo”. Its motto is “Strength for Freedom” and it was the final battleship commissioned and completed by the US. She fought in several battles during World War II and also participated in the Korean War and the Gulf War.

This happened just before the Desert Storm and Desert Shields 1st Shock and Awe Campaign. To anyone who wants to know what exactly constitutes a Big Gun, may I present not one or two but NINE of them.

Take note, that was just one barrel at a time! Imagine how stunning it would look if she conducted triple fire from all of her three turrets — nine of them going off at once all booming and rattling. I bet it’s totally awesome for those guys filming it — how beautiful to see that personally and hear those guns! That’s raw power unleashed right there!

On March 31, 1992, it was decommissioned after 16 years of active service due in part to budget cuts. Because of its high cost in maintenance, it became uneconomical to keep operating it.

“To put away a ship that has become as much a part of you as you are to her is a sad ending to a great tour. But take solace in this—you have lived up to the history of the ship and those who sailed her before us. We took her to war, performed magnificently and added another chapter in her history, standing side by side our forerunners in true naval tradition.” – Last commanding officer Captain Albert L. Kaiss

It has been featured in several films and even music videos. For her service, the Missouri has received several battle stars and other awards.