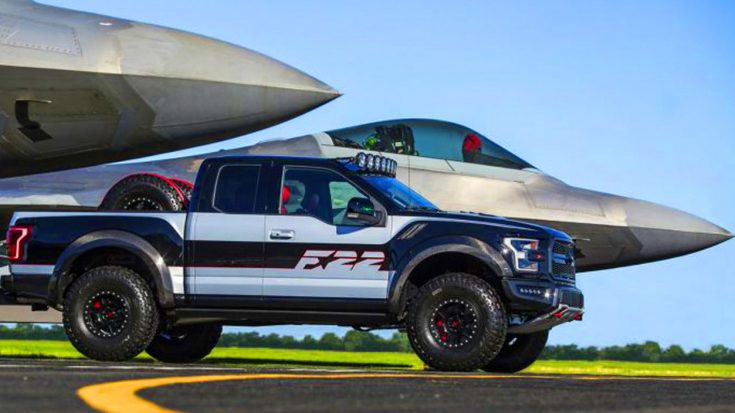 The Lockheed-Martin F-22 Raptor is arguably the fiercest fighter jet on the planet with a proven track record of success. Not many jets out there even come close to the power, agility and the amazing style of the F-22. They say that imitation is the sincerest form of flattery so it doesn’t come as a surprise that the F-22 would inspire a design with a truck it shares a name with.

The one-of-a-kind 2017 Ford F-150 Raptor has been modified with a supercharged engine, enhanced brakes, and many other features. The most noticeable features are the sleek colors and that beautifully designed F-22 Raptor on the grill. This truck just screams power from the very sight of it.

The F-22 Ford Raptor sold at a charity auction and brought in $300,000 for the Experimental Aircraft Association. The proceeds go towards the EAA’s Young Eagles Program which teaches the next generation of young pilots the fundamentals of flight.

It found a home with a new owner but if you want to see it in action just check out this clip from the Experimental Aircraft Association.