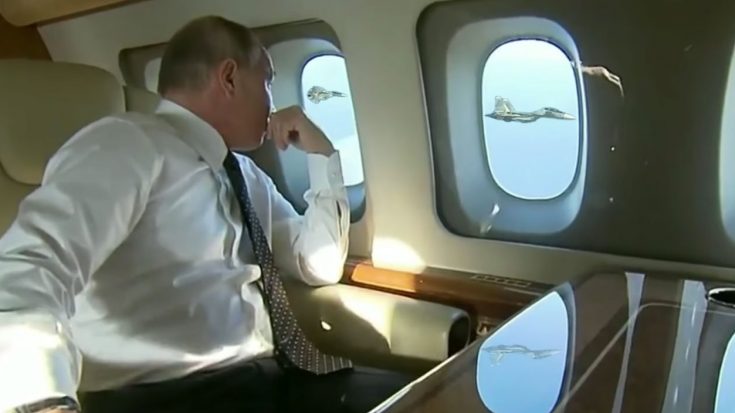 Vladimir Putin is a man of many talents which include riding horseback with no shirt on and holding the same expression without being phased. But he is also a man of the world and has to travel quite often in his role as President of Russia. Although Putin sees himself as some kind of Superman he does travel with fighter planes to defend him.

Soaring among the clouds in his luxurious Ilyushin Il-96-300PU, President Vladimir Putin makes his way to a Russian military base. He sits in a plush leather chair, a beautiful lacquered wooden table surrounded by a luxurious interior setting of his plane. His chair is comfortable but something about the scene doesn’t sit right. He seems to be much more intrigued by the fighters than his royal surroundings.

He has roots in the KGB so covert operations are his bread and butter. As he peers out the window as President you can see the escorting Sukhoi Su-30 fighter jets at his side. He is a man who takes pride in his military and can see it on his face. So check out Putin’s priceless reaction to these fighters, it is what you might expect from him.