Want To Fly With The Blue Angels? Here Are 3 Ways You Can 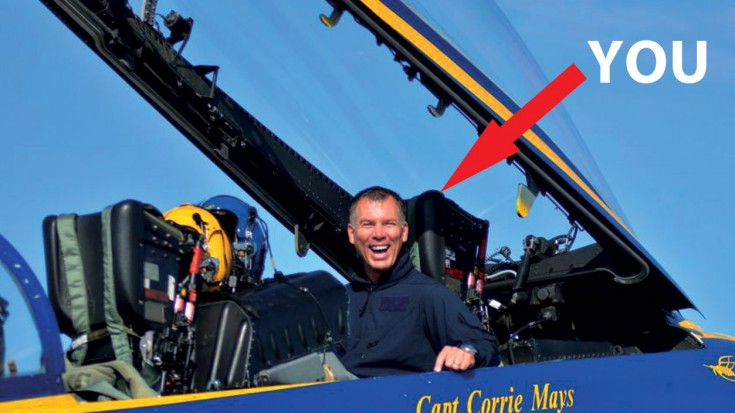 We Hope At Least One Of You Makes It.

Although there are plenty of really talented and fearless aircraft demonstration teams around the world, the Blue Angels have a special place in our hearts. Though the Thunderbirds are awesome and England’s Red Arrows are also elite pilots, it’s the heritage of the Blues we love so much.

We’ve been showing you many awesome videos of the Blue Angels over time, and there are never any negative comments on the videos. Be it a flyby, cockpit view or takeoff video, every one of you always gets excited and share how much you love these guys. There is however, one recurring comment that is not exactly negative, but definitely strikes a sore chord.

The comment, which comes in many variations, is as follows; “How come this (celebrity, newscaster, random) person gets to fly with them and I don’t. I served this country for (x amount of) years and they never gave me a chance to fly with them.” We see this type of comment anytime we show someone flying in the #7 jet.

You can take the back seat of the #7 Blue Angel jet is you’re a credited media representative or part of the Key Influencer Program (see description below.)

Now, for all of you who this applies to we first and foremost thank you for your service. Secondly, you CAN in fact fly with them, but you have to do more than serve. Although this might sound a bit harsh, just because you served doesn’t make you any less/more worthy of flying with the Blues. The people that fly with them did some work to earn it too. Plus, according to the latest census, there are almost 29 million veterans living in the United States. If you got to fly in that back seat just on serving merits, how would that work?

In order to level the playing field and give anyone the chance to fly with them, the Blue Angels have something called a Key Influencer (KI) Program. According to the Blue Angel’s official website, “KI’s may be experts in their field, public figures, leaders of youth organizations, teachers, guidance counselors or school administrators.” As long as these individuals have an impact on youth within their communities, they will be considered after being nominated by the Navy or Marine Corps in their district.

Another way you can fly with them is by being a credentialed media representative. This basically means you have to be a reporter, journalist, photographer or any other person in this field. The whole point of the Blue Angel air show is to raise awareness for the Navy and Marine Corps for recruiting purposes. That’s were being on TV or in newspapers comes in handy.

The last one is the toughest of course. That is, become a Blue Angel. Let’s say there are a few more requirements in order to do that though. But at least you’ll get to fly in the front seat, not the back.

P.S.-As an added bonus, we included one of the best sneak passes of the Blue Angels. Wait until the end. It’s worth it.