Waterskiing With A Plane: T-6 Team With Steady Hands 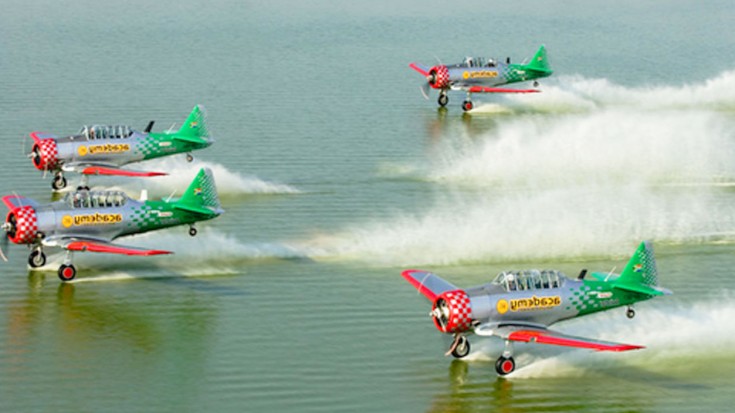 You Certainly Don’t See This Everyday

This fantastic stunt took place in 2006 at the Klipdrift Dam near Johannesburg, South Africa. It was performed by the Flying Lions Aerobatic Team, a four-ship display team that uses North American Harvard aircraft, more commonly known as the T-6 Texan in the U.S. They acquired the planes in 1999 from the South African Air Force which was decommissioning them from service. They have five T-6s in all, but fly only four on display, the last one being used as backup should anything go wrong.

They skimmed the surface and dipped their wheels about 4 centimeters into the water, which was the deepest as they could safely go.

This stunt was performed by four of the Flying Lions, namely, Scully Levin, Arnie Meneghelli, Stewart Lithgow and Eliis Levin. This dangerous stunt was approved by the South African Civil Aviation Authority, but had it been proposed in the U.S., the FAA might have had a problem with it. With no room for error, a single jerk of the pilots hand would probably result in a disastrous nose-over and most likely the death of the pilot. Who’s to say what could have happened though? These skilled pilots trained time and time again, with the end result being this awesome video for your viewing pleasure.