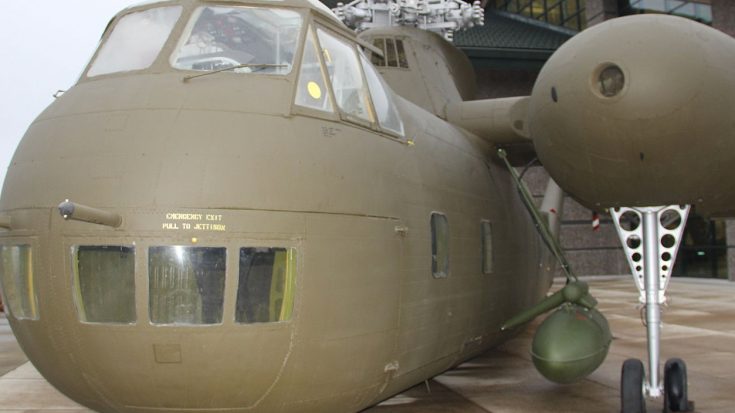 We get it. Looks don’t have any bearing on military equipment as long as it gets the job done and keeps our soldiers safe. It is, however, fun to simply point out that some designs are downright fugly though.

Such is the case of the CH-37 Mojave.

First up in the air in 1953, the helicopter was still in the early stages of its evolution so some designs were “out there”. Built by Sikorsky, the Mojave was a heavy-lift helicopter and at the time of its inception the largest rotorcraft in the West. It used a warbird’s favorite engine, the Pratt & Whitney R-2800 Double Wasp for power, enabling it o lift up to 11,000 pounds.

Due to its ability to lift heavy loads, the Mojave was used to recover downed aircraft. Durign its service, they recovered almost $8 million worth of equipment.

Over 150 of the helicopters were built until they were retired in the late 1960s. During that time, the United States Army and Marine Corps used them due to its ability to transport 26 troops into war zones. With its front-facing hatch, it could also deliver a small vehicle to a drop zone if needed.

We’ve included a neat video below that shows the Mojave in action. It’s an extremely intricate aircraft for its time, that’s for sure.