What A Couple Well-Equipped RC P-47’s Can Do 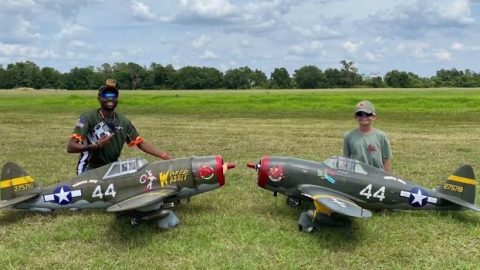 Zip Through The Skies

These planes can fly so high up that it must be hard to keep track of it – or even control it, especially during bad conditions. However, this P-47 comes equipped with an EME 60 with auto-start. This engine gives power and reliability to a warbird with its 60cc power output. It also has an auto-start feature which makes starting the motor easier by just pushing a button or flipping a switch.

Check out how this YouTuber, “Team Futaba Speed Fresh”, expertly flies his P-47D Razorback. The way the engine roars is akin to music in your ears. The plane’s beauty in its design is admirable as well but the way he controlled that plane from takeoff to landing was the star of the show.

His maneuvering skills were great but it was ultimately a two-man team. The other person alongside him also helped him control the plane by giving out instructions during flight and they both did a great job. They make a pretty strong team with that team coordination.