What Happens When Silent Platoon Drops Rifle And It Breaks 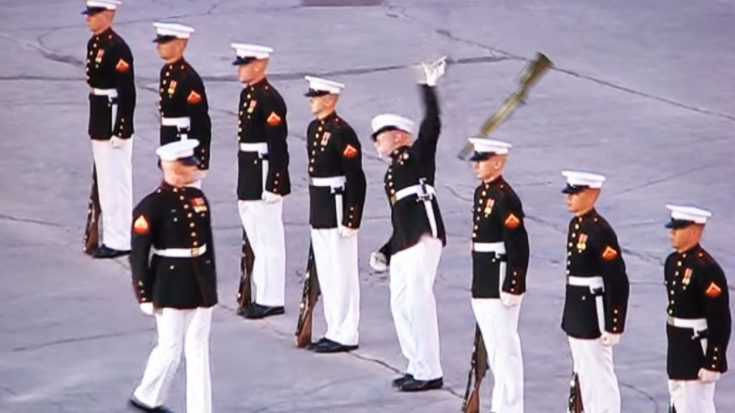 The United States Marine Corps Silent Drill Platoon, or The Marching Twenty-four as it’s often called, is where perfection happens. Their purpose is “to exemplify the discipline and professionalism of the Marine Corps” and it’s something they’ve excelled at for nearly a century now.

This team was formed back in 1948 and was originally supposed to be a one time show, however, people were so impressed by their showmanship that the drill never stopped. Watching them is mesmerizing, as each move is carefully calculated, including the clicks of their rifles when they’re caught.

When searching the internet, we stumbled upon this clip however. We, and most likely you, have seen hundreds of these videos where everything goes as planned. They do, after all, practice their routine year round and the selection process is grueling. Someone did catch what happens when things don’t go as well, however.

During on overhead throw of their M1 Garand, one of the Marines missed catching his rifle. It smashed behind him as people gasped. Like them, we’ve never seen this before.

The Marine who threw the rifle in the first place stopped in his tracks, turned around, retrieved it and tried again. The rifle was broken however, so he just returned it to its owner.

Does anyone know what happens when an incident like that occurs? We’re sure he was chewed out, but does he lose his spot after just one mistake?

Your comments would be appreciated.