Who Were The 3 WWII Veterans Honored At The State Of The Union Address? 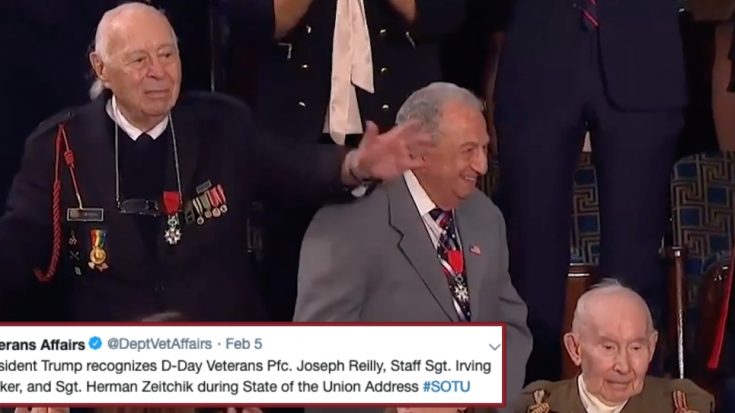 With June 2019 marking the 75th anniversary of D-Day, the State of the Union was the perfect time to acknowledge 3 WWII D-Day veterans. Private 1st Class Joseph Reilly, Staff Sergeant Irving Locker, and Sergeant Herman Zeitchik made a special appearance at the high-profile event.

Here’s a little more about them.

Private 1st Class Joseph Reilly parachuted into France on the D-Day invasion with the 101st Airborne, also known as the Screaming Eagles. The paratrooper then went on to fight in the Battle of the Bulge at Bastogne. At 97 years old, the Santee, California native is no stranger to being honored at events. He’s even met the First Lady before.

He’s a man who loves his country dearly, a longtime member of Guardian Angels Catholic Church, and isn’t afraid to fight today for what he believes is right, just like he did on D-Day.

Staff Sergeant Irving Locker, like so many others, was barely out of school when he began his military service in 1943. He was part of the 116th AAA Gun Battalion which landed on Utah Beach on D-Day. Like Joseph Reilly, he also fought in the Battle of the Bulge. In an earlier video interview, he stated that at just 19, “My promise to my men was to bring them home alive and well, and thats what I tried to do.”

We have to say that how thrilled he looked while being applauded at the State of the Union was very touching.

A year after storming the beach of Normandy on D-Day, young  Sergeant Herman Zeitchik helped liberate the Dachau concentration camp. Joshua Kaufman, a Holocaust survivor who was a prisoner in that very camp, sat right next to Zeitchik during the State of the Union. it was a beautiful moment to see them applauded.

In 2014, Seargeant Herman Zeitchik was finally able to attend his high school graduation. Turns out, he was a junior when he was shipped out, and his parents had to accept his diploma for him. How amazing is that?

Check out the moment these three brave men are applauded by an entire nation in the video below.