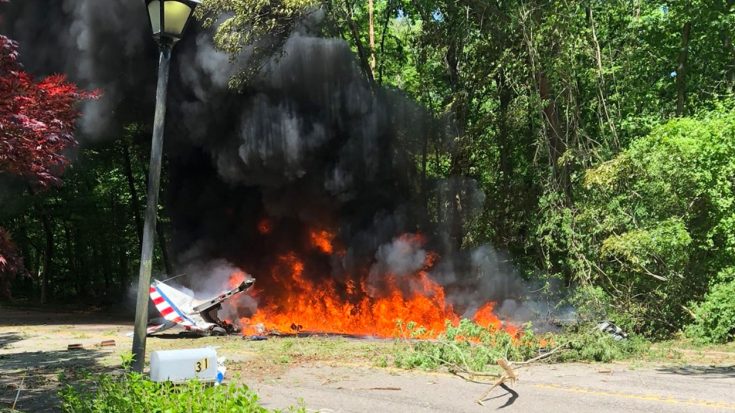 On May 30th, 2018 shortly before 2:00 PM local time, one of the members of the Geico Skytyping team crashed his aircraft while performing at the Bethpage Air Show at Jones Beach, New York. Although it was immediately apparent the pilot did not survive the crash, authorities are not disclosing his name as of now.

The aircraft involved was a World War II era trainer designated SNJ-2, a variant of the T-6 Texan. The Skytypers have been recently sponsored by Geico insurance but upon checking all their social media outlets for any information we encountered all their accounts have been shut down today for unknown reasons.

Accroding to an eyewitness, the aircraft seemed to break up in the air before it hit the ground.

Another witness shared the Tweet below right after the crash. The aircraft hit a wooded area right in front of her house and although there are many houses around, there were no injuries reported on the ground as of now.

To see what these pilots do every flight, we found the video below. It’ll show you a first-person perspective, from the cockpit, of how close these guys get and what it takes to write in the sky.

THIS IS A DEVELOPING STORY. WE’LL UPDATE THIS ARTICLE AS NEW FACTS COME TO LIGHT.