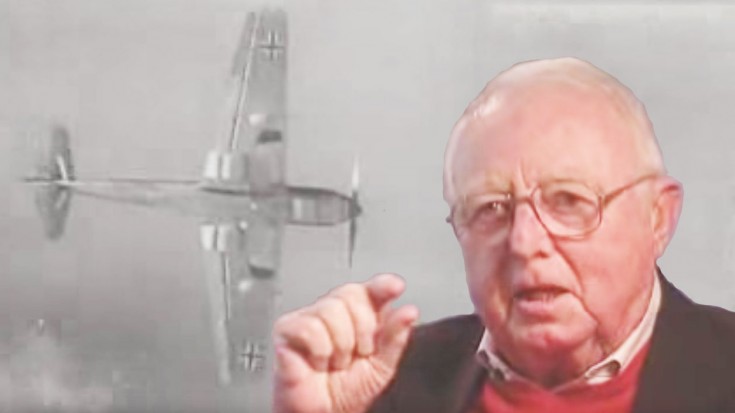 To This Day He Doesn’t Know How That Bf 109 Pilot Did That!

Dr. Clayton Kelly Gross was sent over to fight in the European Theater at the young age of 23. Having earned his private pilot’s license earlier, he was no stranger to flight. He was first flying the P-47 Thunderbolts with the 354th Fighter Group and then transitioned to the P-51 Mustang towards the end of the war in 1944. Naming his now famous Mustang ‘Live Bait,’ he scored his first 5 air victories in that plane. Realizing the effectiveness of the P-51s, he also managed to shoot down an Me 262, the first operational fighter jet in the world.

In this short interview, Gross recalls a particular dogfight from which he almost didn’t walk away from. Approaching a Bf 109 from above, he opened fire and started chipping away at him, getting some hits. The Nazi pilot broke hard up and when Gross followed and swooped back down, he found the Bf 109 on his own tail. He specifically recalls that to this day he had no idea how that pilot did that. He avoided the shells by making circles and eventually gained on him but after some time, he let the German pilot go. What you won’t find out in the footage is the fact that these two pilots met up later in life, the German pilot thanking him for his life.