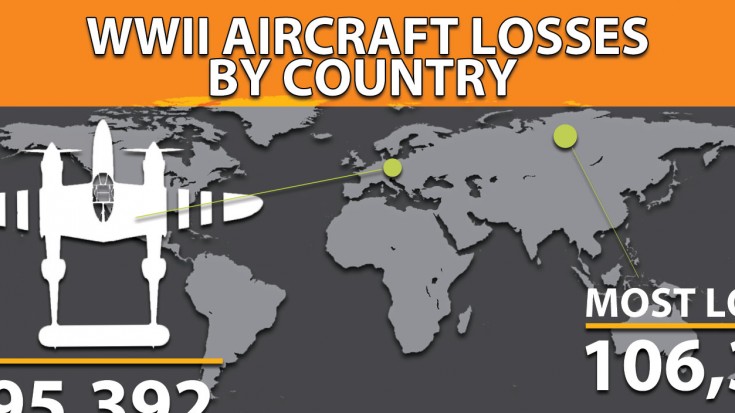 As we all know, World War II claimed more lives than any other conflict during mankind’s existence. From military to civilian losses, every number or statistic you delve into is staggering.

As we’re all warbird buffs around here, we of course jumped into aircraft statistics. We pulled these numbers straight out of USAF’s archives (although we had to do some calculations ourselves) to put these numbers into perspective. As a side note, these numbers account for ALL aircraft lost by country which includes planes destroyed on the ground as well. These are not exclusively dogfight statistics nor planes only hit by FLAK.

Here’s some food for thought and a number to keep in the back of your head while you go through this infographic. Aircraft losses of EVERY WAR SINCE World War II amount to  approximately 4,000. That number could be about 1,500 lower depending on who’s counting, as the Korean War was heavily propaganda based and has an extreme discrepancy in kill counts. Even still, the higher end of 4,000 over the past 70 years still does not compare to the aircraft lost in just 6 years during World War II.

If you found this really meaningful, let us know what other infographics you’d like to see in the future. We just got our hands on thousands of pages of World War II archived statistics and would like to share them with you in an easy to comprehend way.

Voice your suggestions in the comments. We look forward to them.