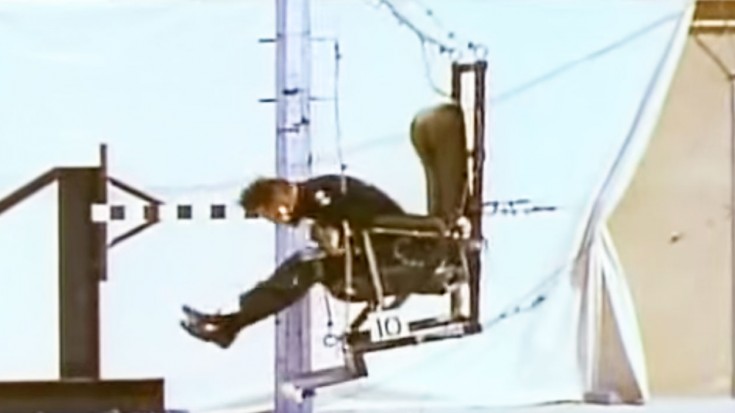 Wonder What He’s Made Out Of, Because It Certainly Isn’t Human.

Meet Colonel Jahn Paul Stapp, an M.D. and Ph.D who was spent his whole life in the U.S. Air Force. His career was filled with all types of different activities, but one of the most notable ones is his research on acceleration and deceleration forces on the human body.

Close with Chuck Yeager who most of you know, he served in the Army Air Corps during World War II as a medical doctor. After the war however, the jet age took off and many questions needed answers. One of them was how will such high speeds affect the pilots. Stapp was determined to answer that in the bravest of ways.

Upon the deceleration you’ll see in this video, the forces Stapp felt made his body weigh about 4 tons!

As you’ll see in the video, Stapp was his own test dummy. During his trials, the results yielded most of the safety regulations and countermeasures that fighter pilots use today. From acceleration to deceleration, Stapp strapped himself into his “sled” which made him become the fastest man on earth as he shattered the land speed record of 632 mph. Then, he stopped within 1 second.

Watch the video to see what happened during that trial. It was his 29th and last one as having been exposed to more g forces than any other surviving human in history made him count his blessings.