WWII Dog Fight Footage- Thunderbolts and BF-109s Go At It 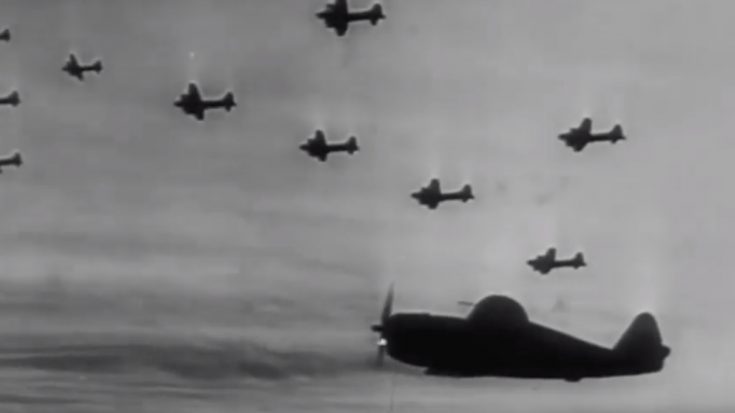 This footage of an air battle between Allied Forces and Germany is absolutely exhilarating. Though black and white and grainy, it will have you on the edge of your seat in only the way a dog fight can.

Better Than The Movies

It begins with a British newsreel narrator describing the raid on a bomber run. Thunderbirds, Lightings, and Mustangs are all there to help. Then all hell breaks loose.

Only a select few will ever know what it was really like up there in those war-filled skies. Stories, air shows, books, and videos like this are as close as we’ll get. But honestly, this feels pretty close to being there.

The sky is packed with action. The noise is breathtaking. Planes appear as dark blots trailing smoke and fire, overwhelming the horizon. In a breathless moment, a plane is blasted to nothingness by relentless fire.

Technology In The Sky

A Look At The Past

It’s pretty incredible that we have the documentation that we have of so many World War II moments. Footage like this helped the military scrutinize and improve tactics, but today it helps us look into the past. We marvel at brave souls doing brave deeds and also, the general overwhelming madness that is war.